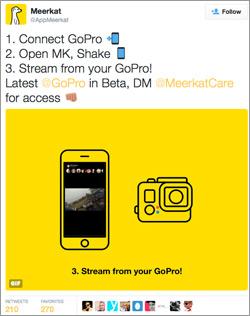 Along with its cool lone-wolf cachet, Meerkat now has another edge on rival Periscope: GoPro. Select owners of the portable cameras can now stream video directly to the popular live-streaming app.

The partnership is part of a broader effort by Meerkat to set itself apart from the Twitter-owned Periscope. The app also recently found as new social media partner in Facebook.

Previously, users still had to sign up for Meerkat through Twitter, even though Twitter no longer supports the streaming platform. Twitter notoriously dumped Meerkat in favor of its own live streaming video app, Periscope, earlier this year.

Meerkat can use every edge it can conceive. Indeed, while the market for live-streaming apps is still taking shape, new findings show that Periscope has a healthy lead on its arch-rival.

Since its launch in late March, total traffic to Periscope has exceeded 6 million visitors -- nearly three times more than traffic to rival Meerkat, according to Adobe’s latest Social Intelligence report.

Among other engagement drivers, Periscope has doubled its average daily mention count since adding Android availability in late May. From a content standpoint, social mentions of Periscope and Meerkat tripled their averages during the Mayweather vs. Pacquiao boxing match, in May.

More broadly, Martin said the rise of live-streaming apps has big implications for the social-media ecosystem. “The introduction of these new social networks shows that social is still an open market for consumers’ attention,” he said. “Marketers should focus on optimizing social to ensure they stay on top of the latest trending network.”