Instagram's Mobile Ad Revenues To Hit Nearly $3B By 2017 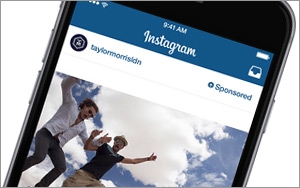 While its popularity is plain to see, Instagram’s financial picture has been harder to make out.

Yet new projections from eMarketer put the Facebook unit in a most flattering light.

By 2017, Instagram's global mobile ad revenues will reach $2.81 billion -- accounting for over 10% of Facebook's global ad revenues -- according to eMarketer. If accurate, Instagram will then have higher net mobile display ad revenues than both Google and Twitter.

This year alone, Instagram will rack up $595 million in mobile ad revenue around the globe, eMarketer expects.

“Now that Instagram is opening up, there is a lot of pent-up demand,” Debra Aho Williamson, principal analyst at eMarketer, explains in the new report. “The rollout of new features over the next several months means that by the end of 2015, Instagram will have a host of new ad products for advertisers large and small.”

“In particular, Instagram advertisers will be able to use a full slate of Facebook targeting tools, including the popular Custom Audiences feature,” Williamson added. “That will be a key drawing card.” That doesn't count Instagram’s desktop potential, considering that eMarketer's estimates are limited to Instagram’s mobile business.

This year, Instagram's ad revenues will make up 5% of Facebook's mobile ad revenues -- a share that will increase to 14% in 2017 -- eMarketer predicts. For its three-year forecast, eMarketer notes that the vast majority of Instagram’s ad dollars will come from within U.S. borders. Indeed, the U.S. will account for 92% of Instagram’s total in 2016, and 85% in 2017.

That said, the research firm forecasts that Instagram will have just $30 million in ad revenues outside the U.S., this year -- or 5% of the total. Along with the U.S. market, Instagram advertising is presently available in Australia, Brazil, Canada, France, Germany, Japan and the UK.

By 2019, over one-third of the country's population is expected to use the social network -- amounting to 111.6 million consumers.