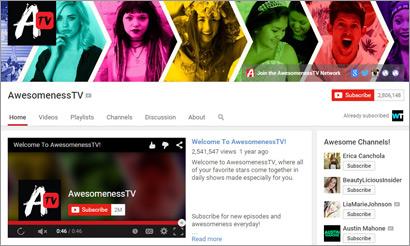 Facebook may have a strong ad placement infrastructure for television campaigns, but it lacks the extensive network that YouTube created through Google that pulls in search.

YouTube's growth comes from more than assistance from multichannel networks (MCN) like AwesomenessTV, whose talent landed in musical campaigns for Macy's, Old Navy, and Target, but from video stars like Ian Hecox and Anthony Padilla who gained the financial backing to produce the move Smosh, the YouTube's channel namesake, which debuted mid July.

Jamie Byrne, director of content commercialization at YouTube, said there is an increasing awareness by brands that the creators are rising up and becoming more influential because audience viewing behaviors are shifting. The number of channels making more than $100,000 annually grew by more than 50% in the past year, Byrne said. YouTube monetizes the content and shares the revenue with channels.

Product placement continues to gain momentum in videos linking to search campaigns, but not in the same way as in the early days of television. Kohl's Life's S.O. R.A.D. campaign with Lauren Elizabeth and Arden Rose go on a road trip opening the season by thanking Kohl's for all the cool stuff they will pack for the trip. Or Royal Crush, a scripted series about teenage romance that takes place on a Royal Caribbean cruise while on vacation allowing viewers to vicariously engage in activities like skating or swimming.

While brands and retailers buy search ads to extend video campaigns driving traffic to their sites, many miss a huge opportunity to drive clicks to YouTube channels or Facebook fan or brand pages. Optimization brings the YouTube videos up to the top of the query results, but searchers need the exact correct phrase for search engine optimization skills to work. The opportunities in paid search advertising are lost to tie Google, Bing or Yahoo paid search or native advertising campaigns to landing pages in YouTube or Facebook.

YouTube talent who have their own channels also see the opportunity to tie online video channels into search engine results through optimizes content, but they don't see the benefit of linking through paid advertisements with brand sponsors and search advertisements.

Beth Greve, chief revenue and partnerships officer for AwesomenessTV, which DreamWorks Animation purchased in 2013 for $33 million, says that quick, topical themes and words typically attract the attention of viewers to channels. One day after the trailer for "Fifty Shades of Grey" was released, our producers got a crew of talent together and we did a YouTube version of 'Fifty Shades of Bae' [before anyone else], because 'Bae' is the hot word on YouTube," Greve said. "We shot it and got it up the next day. It produced hundreds of thousands of views."

Greve said the MCN supports more than 90,000 channels in the network on YouTube that entertains about 144 million followers with around 1 billion video views monthly.

Facebook doesn't allow Google to individually index videos running on brand pages, but the search engine does link to pages through a logo that serves up in search results. The walled garden keeps the video ad from indexing in search results.