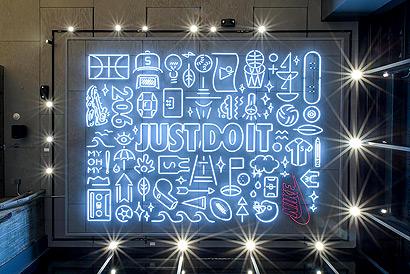 Nike has just taken the wraps off yet another re-imagined store — this one in Seattle — offering a closer look into its intensified direct-to-consumer marketing strategy.

The company says it has redone the store to showcase its “innovative products and personalized services” — the kinds of high-touch attention only physical stores can provide. It includes a treadmill in the shoe department for run-gait analysis, for example, sports-bra fit experts, pant-hemming and personal style consultations. It’s also part social club, with weekly three and five-mile beach runs (complete with water taxi service.) And it’s a dedicated e-commerce waypoint, enabling in-store and Nike.com purchases through a single mobile transaction.

The new store, which also includes a custom neon-sculpture celebrating the city’s sports symbols, follows other high-profile openings in recent months, including three “brand experience” stores just for women, and an extensive remodel of its Santa Monica, Cal. store to emphasize offerings for women and the Nike+ community. Last month, it also tweaked its factory store concept, opening its first-ever retail destination in a college town, less than a mile from the University of Alabama.

It’s expanding its Community Store presence to the East Coast, with stores in Flatbush, Brooklyn, and the Washington, D.C., area. (Community Stores are meant to “empower a healthy local community, partnering with local organizations,” the company says.) It already operates Community Stores in Portland, South Chicago and New Orleans.

Each format is part of the company’s aggressive direct-to-consumer sales strategy, one that looks to both combine and differentiate the online vs. physical store experience.

"These stores make a very big difference to the brand," says Andrea Weiss, a retail consultant and founder of the O Alliance in New York. Even though most of the athletic giant’s customers buy their Nike products somewhere else — whether at a sports store, a department store, or even through Amazon — “the company really gets that customer journey is about all the ways people engage with the brand over a lifetime, not just where they make the transaction.”

The company has stepped up its spending on DTC efforts: There are now 832 Nike store locations, up from 768 a year ago. And they’re doing well, posting a 16% jump in same-store sales in its most recent fiscal year. Nike’s e-commerce unit, meanwhile, continues to be a juggernaut, up 59% in the fiscal year, crossing the $1 billion threshold for the first time. Combined, the direct-to-consumer sales rose 25% to $6.63 billion. (The company’s total sales for the year were $30.6 billion.)

While there’s certainly no shortage of competition, including very real pressure from Under Armour, “Nike is one of those few retailers, like Ralph Lauren, that manages to keep its edge,” Weiss tells Marketing Daily. “When you walk into a store, the shoe even has version names, like technology. There are live social feeds on the wall. It’s staffed by people who ask intelligent questions, like whether you’ll wear that sports bra for yoga or for running. And once you’ve purchased something, they follow up with, offering personalized colors of your favorite shoe through email,” she says. “It’s full engagement, and completely circular.”

Meanwhile, NPD Group just reported that athletic footwear is making gains across the board, with dollar sales rising 8% in the first half of the year, increasing momentum as they move into back-to-school sales. Nike continues to dominate, with a 58% share, dwarfing such brands as Skechers and New Balance, each with 5%, or Asics and Adidas, each with 4%.