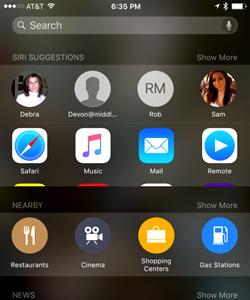 A few weeks into testing Apple’s iOS 9 Beta, and my habits are already shifting around a great new Spotlight Search page. This simple addition from Apple has the potential to alter on-deck discovery and search patterns.

Long ago I got in the habit of invoking most apps by using the Spotlight Search box instead of rifling through my many pages of apps. I don’t recall which page or in which folder a given app is. In either case, the app is several gestures away. But when I pull down the search tool, one letter usually calls up Fandango or Zillow or SNL or whatever.

Apple must have been watching a lot of us fall into this habit, because it supercharged that Spotlight Search page to include many of our most likely needs. If it isn’t already, I am sure the feature could become hyper-personalized and contextually relevant. If Siri knows my usage patterns, then it knows Saturday at 4 p.m. is a more likely time to surface Fandango for me than any weekday. The new screen includes a row of services nearby like food, entertainment, gas and shopping. Interestingly I noticed that these Nearby icons change during different day parts. In the evening, for instance, special icons like Desserts, Bars and Nightlife creep into the mix.

The new screen is also an opportunity for Apple to push its News app of aggregated sources. Beneath the suggestions, the page pulls in the latest headlines from the app. Apple is serious about its news operation, for which it is hiring editors, according to reports. As in its new Music app, the company appears to be fighting off algorithms with people power.

As a user, I imagine getting very accustomed to using this screen instead of my default home screen as my point of entry. It shortcuts me through the usual app clutter. It has the potential to develop a new set of user reflexes -- of relying more and more on the OS to surface specific information instead of the traditional app interface.

In so many ways, Apple is clearly trying to pile more services and functionality into the Siri interface that direct us first to Apple services or its direct partnerships. Whenever I want to hear a song, whether I own it or not, Siri loads it instantly from my Apple Music account. As that kind of push button (or voice-activated) delivery migrates to other information categories, the OS is no longer just a platform for apps. It is critical liaison between user and digital information. That would seem to be a very powerful place to be, and one that could leave media and marketers scrambling to ensure they're included.