Google is trying to expand its view of ad viewability, a key metric in the online advertising industry. The Mountain View, Calif. company, has updated a patent application with the U.S. Patent & Trademark Office describing a technique to determine whether a specific point on a Web page -- not just an ad -- is viewable through the browser window.

The browser often shows only part of a Web page, creating difficulty in verifying whether an advertisement on the Web page served up in view. The patent provides examples of ads in view, but it also suggests that companies can use the method to identify other types of content by frequently referring to "content for display."

Some believe that the Media Rating Council (MRC) and the Interactive Advertising Bureau (IAB) standards for the display and video ad viewable rates are inadequate. MRC and IAB define the rates as 50% or more of the ads pixels appearing on-screen for at least one continuous second. A video ad is deemed viewable if 50% of its pixels appear on-screen for at least two consecutive seconds. Another issue of increasing focus is viewable content as more brands use alternative forms of advertising.

Google hopes to squash that issue before it turns into a problem. Patent No. 20150220973 filed on April 15, 2015, and updated August 6, 2015, claims the step to determine "an area" on the Web page, not just an advertisement, is within the viewable portion, but it relies on testing in real time. Google inventors point to the behavioral characteristic in a frame progression rate as one way to determine if the content rendered in view. The advertiser may or may not pay the publisher to serve that content, but similar to search advertising on engines there is no verification process to tell whether the ad was seen in a viewable space on the Web page in open browser.

"Browsers will typically redraw elements of a Web page at a higher rate if they are currently in view through the browser window, and this characteristic can therefore be used to determine whether the test feature, and thus the region, is in view," per the patent. "The present invention finds particular utility where the region contains an advertisement, as it allows an advertiser to discover whether the advertisement has been seen by users."

Publishers and advertisers have been struggling to verify when an advertisement serves up in a viewable portion of the Web page. 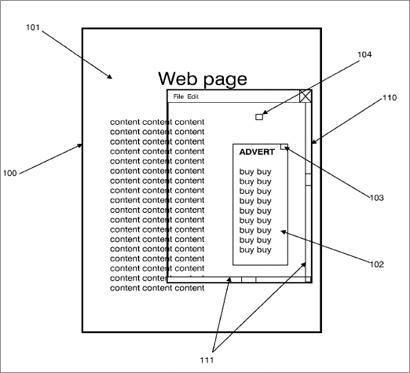