Just Like Mom Used To Make: 'Fresh Baked' Food For The Pooch 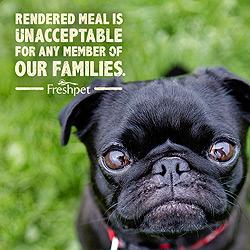 When Freshpet originally launched in 2006, the pet food brand helped to revolutionize the category by introducing refrigerated products. Now, Freshpet is moving down the aisle to introduce Fresh Baked, its first line of dry foods.

Developed by agency The Terri & Sandy Solution (T&S), the "Fresh Take on Pet Food" campaign introduces the Freshpet brand and its product offerings. The creative portrays its pet food as enticing as upscale human food by showing close images of juicy chicken, fresh berries and whole grains. These shots are paired with pictures of happy and healthy pets.

In-store and online activity will further extend the campaign messaging with headlines that touch on various brand beliefs, such as: “Rendered meal is unacceptable for any member of our families” and “As idealistic as the dogs we feed.”

The campaign conveys that what pet parents feed their pets is just as important as what they feed their families.

The integrated campaign includes a 30-second and five 15-second TV spots featuring different products, including the new Fresh Baked dry food. These spots run on both cable and network TV, including HGTV, Bravo, Lifetime, TBS, ION, A&E, and during shows including "Judge Judy" and "Friends."

The buy begins the week of August 10 and runs through September 21.

"Freshpet is a committed company that wants to bring fresh and natural foods to our pets. Terri Meyer, co-founder and co-president of The Terri & Sandy Solution, said the campaign needed to capture Freshpet’s bigger mission: Bringing the power of fresh food to dogs and cats—whether refrigerated or on the shelf.