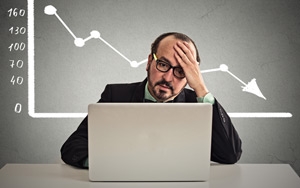 In results unlikely to surprise anyone in the industry, a new online poll finds 80% of marketing professionals saying that they're generally over-loaded with work. Additionally, 97% reported that they're stressed to one degree or another — with 25% saying they're "overly stressed" or "stressed to the max."

Still, asked if they regret having a career path in marketing, 84% said "no."

The survey, commissioned by Workfront, a work management software provider, was conducted by MarketingProfs on the MarketingProfs.com Web site from April to May among 526 marketing professionals who are users of that site.

Eighty percent of responding marketers also said that they're generally understaffed, versus 17% saying that they are staffed "just right" and 3% reporting being overstaffed.

Asked to choose the three things that make them dread their jobs the most, 55% picked "proving [my] value to people who don't understand what [I] do."

Nearly as many (51%) chose "juggling all of [my] work to get it done in a 40-hour work week" (a result that would seem to raise the question of whether these professionals are actually managing to maintain 40-hour work weeks —  and if so, how stressed can they be?).

The third most-cited annoying work factor is "people who think they have great marketing ideas (and don't)," chosen by 42%. Other irritants include constantly having to put out fires (36%), stakeholder approvals (26%), going to meetings (19%), having to report failure (17%) and working with internal clients (9%).

Asked to identify the top metric used to judge their marketing team's success, 16% said the success of the sales team. Other key metrics are lead counts (14%), quality of the work (13%), delivering projects on time (12%), productivity/efficiency (12%) and client satisfaction (10%).

Emails and status meetings are the most common means of receiving work requests (cited by 63% and 38%, respectively). Those two channels are also most used by marketers for keeping their bosses in the loop (cited by 42% and 32%, respectively).

More marketers reported getting work requests and updating their bosses during hallway conversations (18% and 12%, respectively) than through work management software (14% and 3%, respectively).

Looking at responses within the four different types of marketing teams represented by respondents, communications and PR professionals were the least stressed, with just 14% saying they are "overly stressed" or "stressed to the max." In comparison, 30% of leadership team members reported the same, followed by creative services (29%), operations, events and other (28%) and the digital marketing team (26%).

The report, which includes more specific breakouts by team types, is posted on Workfront's site.