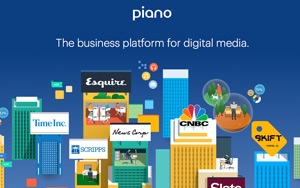 With more publishers hoping to cash in on digital circulation through subscriptions and similar strategies, content monetization and paywall tech firms Tinypass and Piano Media are merging to offer publishing customers a wider range of tools and business models.

The new merged entity, known as Piano, will be led by Tinypass CEO Trevor Kaufman; Piano Media CEO Kelly Leach will join the company’s board and serve as a senior adviser.

The news comes not long after Time Inc. chose Tinypass to power online paywalls for big properties, including the Web sites of Entertainment Weekly and Real Simple, among others, while other magazine and newspaper publishers contemplate similar moves.

The merged operation centers on a new audience intelligence and monetization platform, called VX, that segments audiences and presents users with different access options based on each user’s individual profile. These options can include subscriptions, ads, pay-per-view, registrations, newsletter sign-ups, surveys, social shares, sponsored access, and the like.

The platform works with a range of advertising services, allowing publishers to identify and execute the optimal mix of paid access and ad-supported media. The VX platform can track and monetize users across different channels including the Web, apps, and traditional media.

Piano’s clients in this country include NBC Universal, Time Inc., The McClatchy Company, Hearst, Comcast, and News Corp., among others. Overall, the company says it provides online paywall technology for over 1,200 media Web sites around the world.

Last year, the company’s investment backers, 3TS Capital Partners, acquired Press+ from R.R. Donnelley and merged it with Piano Media. At the time of the acquisition, Press+ operated online paywalls for a roster of around 560 news sites in the U.S. and abroad, while Bratislava-based Piano Media’s business was concentrated in Europe, with major clients including M. DuMont Schauberg, Verlagsgruppe Passau, DC Thomson, Agora S.A. and IBT Media, among others.