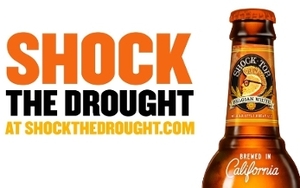 Anheuser-Busch’s Shock Top Brewing Co. is teaming up with Indiegogo and state water organizations to try to alleviate the drought situation in California.

Shock the Drought is a program to identify, fund and distribute water-saving innovations that have the potential to impact the situation by reducing water usage in the state.

Every remaining month this year, Shock Top will fund an impactful water-saving invention on Indiegogo, spurring water conservation projects past their fundraising goals and releasing thousands of products to a state thirsty for solutions.

California is a prime market for the beer brand, with one out of every four Shock Tops purchased there.

"We love the State of California … and we want to help by bringing our innovative thinking and unique brand spirit to rally support and make a positive impact on this very serious issue," says Jake Kirsch, vice president, Shock Top, in a release.

To kick things off, Shock Top will deliver $100,000 in funding for Drop-A-Brick 2.0, a modern, eco-friendly innovation that sprang from the classic drought tactic of placing a real brick in a toilet's tank to save water. Today's Drop-A-Brick is made from rubber to prevent damage to the tank and improves flushing performance, all while saving about 50 gallons per week.

By funding a 2.0 version, Shock Top will help save millions of gallons of water across the state of California each year. If 30,000 Drop-A-Bricks were used, it would save enough water for nearly half a million people to drink water for an entire year.

Tens of thousands of bricks -- and future products -- funded by Shock Top will be donated for free to partner organizations to be distributed throughout California areas hardest hit by the drought. California residents can visit ShockTheDrought.com to pledge support, submit their own water-saving inventions and discover new water-saving tips to join the movement.

After months of water restrictions, California residents are more inspired than ever to take a role in fighting the drought, according to a new survey from Shock Top.

Nearly half (47%) feel a greater responsibility to help the state and a vast majority of Californians (88%) make an effort to conserve water on average five times per day. Nearly all (96%) Californians have done at least something to reduce their water usage, including taking shorter showers (74%), re-wearing clothes before washing (48%) or even flushing the toilet less often (48%). One in two Californians (49%) report that they'd like to find even more ways to conserve water.