Sprint Asks, How About Forever -- Is Forever Good For You? 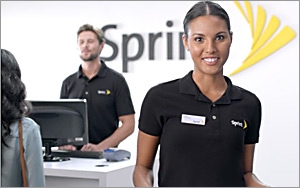 For its latest promotion offering iPhone customers “free upgrades forever,” as soon as they want them, Sprint is taking the straightforward approach.

A new commercial touting the “iPhone Forever” offer features a saleswoman (the same actress who appears in a spot for the company’s “All-In” plans from the summer) directly addressing the camera about the offer. “With iPhone forever from Sprint, you can always get the latest iPhone so you never have to wait for your upgrade,”  she says. “No more waiting. And no more being jealous of that guy who always has it.”

“We wanted to be very direct about it,” Tracy Palmer, Sprint’s vice president of advertising, tells Marketing Daily. “If we wanted to call something ‘Forever,’ we wanted to be clear about what we meant.”

(She adds that using the same actress from the previous promotion was “a little bit of a perfect situation,” and that the company is not trying to create a recognizable character à la AT&T Wireless’ “Lily Adams.”)

The offer, which Sprint announced earlier this week, is intended to tap into the extensive “iPhone” loyalist market, who may feel hampered by being unable to upgrade when the latest version of their device hits the market. The new plan enables new and upgrade-eligible Sprint customers to get a new 16 GB iPhone 6 for $22 a month, and they will be able to upgrade at that same price any time a new iPhone is released. (The company is also holding a special promotion for those who join the plan by Dec. 31, 2015 to have a new phone for $15 a month, which will increase to $22 a month at the next upgrade.)

“People love their iPhones. The promotion itself capitalizes on the fact that when you love your iPhone and a new one comes out, you want it,” Palmer says. “It’s an opportunity to really focus on the iPhone loyalists.”

The video advertisement will appear on television and in online pre-roll. The campaign will also include print advertising.

campaigns, wireless
1 comment about "Sprint Asks, How About Forever -- Is Forever Good For You?".
Check to receive email when comments are posted.
Next story loading