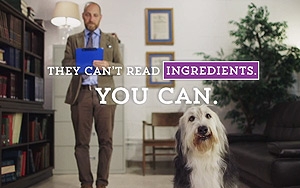 Pet food company Castor & Pollux Natural Petworks is taking a tongue-in-cheek approach to remind viewers that dogs cannot read and it’s up to pet owners to do the homework on what they are feeding their dog.

A 30-second online video breaks nationally in early September promoting Organix dog food. The spot is TDA_Boulder’s first work of the brand, which was bought by Merrick Pet Care in 2012.

The unstated takeaway of the spot: There are big differences between organic pet food brands and it’s up to consumers to think carefully about what they give their pet to eat.

The spot is tagged “They can’t read ingredients. You can,” and a voice-over at its end concludes, “America’s number one organic pet food. Organix. Let’s do better.”

The spot–which is designed to hold a dog owner’s attention with or without sound–will be served to “organically informed consumers,” a mostly female audience (65%) defined by the attributes: health-conscious, 25 – 60, $75K+household income, and with pets. It will also be served to past organic pet food purchasers. The targeted buy is via four ad networks, Specific Media, Quantcast and YuMe (online), plus Ninth Decimal (mobile).

“Having the researcher asking ever more desperate questions seemed like a fun way to remind pet parents that they have to take responsibility for their dogs’ diet,” Jeremy Seibold, TDA_Boulder creative director tells “Marketing Daily.” “And, since it would be popping up on viewers’ screens, it was an idea that worked well with or without sound.”

Amarillo, Texas-based Castor & Pollux Natural Petworks is the manufacturer of Organix premium dog and cat foods, which come in both dry and wet varieties, plus treats, all made without corn, wheat or soy, in an organically certified kitchen. Organix is available at national retailers such as PetSmart and Whole Foods, at other natural grocers, and online. It is priced from $18.99 to $62.99 (kibble) and is one of the category’s top sellers.

This is Castor & Pollux Natural Petworks’ first advertising since 2012, when the company was acquired by Merrick Pet Care, Inc. TDA won the Merrick account in February of this year, and was awarded the Castor & Pollux several months later.

Merrick is the only U.S. manufacturer certified to make both dry and canned organic food for pets. During the spring of 2013, Castor & Pollux introduced 24 new recipes for dogs and cats.