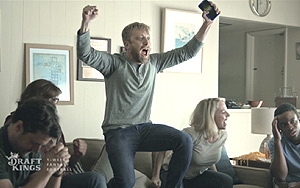 Fantasy sports league DraftKings is shedding its frat-boy past under its new AOR Butler, Shine, Stern & Partners (BSSP). After previously running direct-response ads that targeted men with humor and puppets, the agency is introducing a new brand campaign that speaks to both men and women.

"Welcome to the Big Time" is the new theme, likening fans to athletes on the field who are competing to win. Unlike previous ads, these spots showcase its diverse user base that consists of both men and women, as well as various race and ethnicities.

Vignettes highlight DraftKings participants’ passionate style of training, rituals and spike-the-ball enthusiasm for winning against the backdrop of experiencing sports in a participatory way.

“DraftKings is the hottest brand in the DFS [daily fantasy sports] industry, successfully merging sports, technology and fan reverence in a single unique offering, “said Patrick Kiss, managing partner at BSSP. “Our challenge with this new campaign was to explain how DraftKings works and why its platform goes beyond fantasy as usual. We immediately saw leveraging how fans interact with DraftKings as the best way to tell the brand’s story.”

Academy-award nominated actor Edward Norton serves as the narrator, helping to position DraftKings as a more high-end brand. Gone are the days with an unknown actor voicing a hand puppet. "We were searching for a voice and personality that reflected the brand, and specifically the competitive nature of our fan base," says Mark Krajan, creative director at BSSP. "We wanted that voice to be engaging, authoritative, and obviously recognizable. We felt that Edward Norton was a great match on all counts and that he really elevated the message and the execution."

The campaign consists of five ads, all voiced by Norton, and timed to coincide with the start of the NFL season. The first spot will debut during NFL pre-season on Sunday, August 30 with additional spots airing on FOX, ESPN, NBC and CBS. A second wave of ads will roll out in mid-September. BSSP will also develop advertising across other media channels, including out-of-home. See one ad here.

BSSP took over the development of advertising and marketing communications across media channels in June. Havas Edge – who previously handled strategic counsel and creative services as DraftKings’ first advertising agency – continues as the company’s media buying agency. The fantasy league is projected to spend $200 million on advertising this year, up from $35 million in 2014, according to Kantar Media.