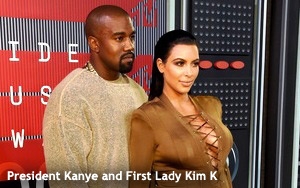 Kanye West got people talking Sunday night on MTV’s Video Music Awards, but the talk was negative when it came to his presidential aspirations.

You might conclude from this that Kanye has a snowball’s chance in hell of being elected president in 2020, the year he says he has picked (perhaps at random) for a presidential run. Of course, to win the office that year, he’ll have to unseat popular incumbent Donald Trump, who will undoubtedly be seeking a second term.

Meanwhile, here in the present day, Sunday night’s chatter about Kanye -- both pro and con -- took place on social media, where the VMA audience was apparently tweetin’ up a storm.

All told, nearly 7.7 million tweets were posted on Twitter on the subject of the VMAs between the hours of 8 p.m. and 11 p.m. Eastern on Sunday night, according to a post-VMAs analysis by Amobee Brand Intelligence. The three-hour time frame included the two-hour awards show from 9 to 11, preceded by an hour of arrivals coverage.

This year’s Video Music Awards, hosted by Miley Cyrus (and her ever-present tongue), aired on MTV, plus a slew of other co-owned channels such as VH1 and BET. Ratings stories such as this one on Deadline.com put the telecast’s total audience at 9.8 million across 10 Viacom networks -- down from 10.3 million last year.

Kanye West received one of the night’s special awards -- the annual Michael Jackson Video Vanguard Award, which is sort of a lifetime-achievement award. West accepted the award at or around the telecast’s final quarter-hour.

During his speech, which included his announcement that he is contemplating a run for president of the United States (since, after all, once you’ve won a Michael Jackson Video Vanguard Award, what else is there to shoot for?), tweets reflecting “negative sentiment” about the VMAs peaked -- 15,921 negative tweets at 10:47 p.m., Amobee said. The implication was that this “negativity” was spiking in response to Kanye’s contemplation of a presidential campaign.

Despite the apparent thumbs-down Kanye West seemed to receive for his presidential ambitions, he was nevertheless the evening’s social media champion. West was the subject of nearly 2.3 million tweets over the course of the evening, according to Amobee’s tally.

Miley Cyrus was in second place with more than 1.5 million tweets, Amobee said. She certainly worked hard for them -- sticking out her tongue at every opportunity, changing frequently into a series of outlandish outfits, extolling the virtues of pot-smoking about every five minutes, and reportedly baring one of her nipples at least once. Oops.

Where West was concerned, the chatter and attention he received was likely due to his penchant for making headline-making comments at previous VMAs (and other music award shows). And he was also accompanied by his wife, Kim Kardashian, who by the way, was not nearly as popular as her husband in the Twitterverse on Sunday night. Amobee tallied only 71,982 tweets about her.

The lesson here -- if there is one -- is that a person can attract more than a million tweets during an event such as the MTV Video Music Awards by cultivating, in advance, a reputation for attention-getting behavior. A deeper question, which I am in no position to answer, might be: What’s the value of all that attention and all those tweets, especially if one has to earn it by sticking out one’s tongue, shaking loose a nipple or making a rambling speech?

It should be noted that the Deadline.com ratings story referenced above has MTV making claims about social-media activities surrounding the VMAs that greatly exceed the figures tallied by Amobee. For example, according to MTV, the VMAs “generated 21.4 million tweets,” Deadline said -- far more than the 7.7 million cited by Amobee.

It’s possible that MTV’s tally includes tweets going back days or even weeks, as some Twitterers made mention of the VMAs in anticipation of the event. When it comes to a TV network’s analysis of its own ratings or social-media data, the more the merrier.