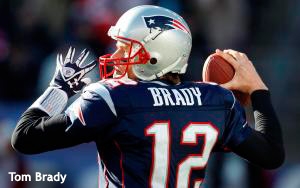 It feels like déjà vu all over again: Another NFL season is about to start, just as the league seems to be embroiled in another round of negative headlines.

Sound familiar? Those with short or selective memories might have forgotten by now the scandals that everyone predicted would rock the start of the NFL season last year. In fact, most people forgot them as soon as the clock started on the first game.

Now another NFL season will kick off tonight (Thursday, Sept. 10) on NBC, featuring the team and star quarterback at the center of this year’s negative NFL stories -- the New England Patriots and Tom Brady, who just happen to be the NFL’s defending Super Bowl champions. The results are easy to predict: Far from turning people off, they’ll tune in by the millions.

I have never really believed in the old p.r. saw that insists “there’s no such thing as bad publicity.” Actually, there is plenty of “bad” publicity. Just ask anyone who has been involved in an embarrassing public scandal about how his marriage is doing, or how his job search is going.

But where the NFL is concerned, maybe the old saw is true. For the NFL, scandals just seem to bring more attention, more viewers, more money. This will undoubtedly be the case this year, starting with the season’s first game, the Patriots vs. the Steelers, airing on NBC on Thursday night. The kickoff of the new NFL season continues on Sunday on CBS and Fox.

A year ago, pundits predicted that millions would shun the NFL at the outset of the 2014 season following a series of domestic-abuse stories involving NFL stars -- most famously Ray Rice, the Baltimore Ravens running back who was caught on video punching his then-fiancée and knocking her unconscious in a hotel elevator.

Well, millions didn’t shun the NFL -- not on opening day or any other day as NFL football proved itself to be, once again, the most popular attraction on television last season. Apparently, the multitudes who love professional football had no problem separating those off-the-field travails from the on-the-field action they love to watch on TV.

This year’s scandals are different than last year’s in several ways. They don’t involve allegations of violence committed against spouses, girlfriends or children, for one thing. For another, the stories about spying on other teams and deflating footballs in violation of NFL rules would seem to qualify as on-the-field scandals rather than misbehavior taking place off the field -- where at least technically, they wouldn’t likely affect the quality of play.

Some might conclude that on-the-field scandals having the potential to affect play and/or the outcome of games might serve as a bigger turnoff to an NFL fan than a series of stories about domestic violence. Nobody likes a cheater, right?

That’s right, they don’t -- which is one reason why Thursday night’s season opener will draw so many viewers: Many will be eager to see the Steelers beat the Patriots, and in the process, sack the Patriots’ Teflon-coated football deflator Tom Brady.

However, many more fans who will watch will have little or no interest in the deflategate and spygate scandals, even though the NBC booth announcers, along with Bob Costas, will likely discuss it incessantly. For most fans, football is just football. Whether they love or hate Tom Brady, they love to watch a great quarterback as much as everything else they love about football -- tackling, rushing, the coaching strategies, interceptions, fumbles, last-second field goals, the whole nine yards.

For weeks, it looked as if the Patriots would not have their star quarterback available to them on opening day. But a judge’s decision struck down the NFL’s suspension of Brady for the first few games of the season and the day was saved -- for the Patriots, for fans, and for NBC.

Suddenly, the negative attention has shifted to NFL Commissioner Roger Goodell, who’s being vilified by sportswriters and talk-radio hosts as a weak leader who can’t even make a punishment for cheating stick, especially when it involves the league’s top star.

But Goodell said in an interview this week that he doesn’t plan to attend Thursday night’s Patriots-Steelers season opener. He’ll likely watch it on television, though -- along with millions of others who will likely make NFL football this year’s top-rated TV show again this year, and probably for years to come.