Your Show Of Shows: NBC's 'Best Time Ever' Exceeds Expectations 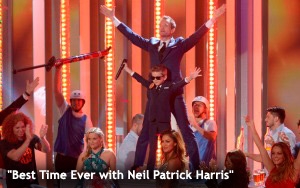 Neil Patrick Harris’s bag of talent tricks contains even more than any of us previously thought.

For example, last night on the premiere of his new NBC show “Best Time Ever with Neil Patrick Harris,” he actually did a backflip off a pogo stick while wearing a tight-fitting suit and tie and regular street shoes. And he’s 42 years old -- an age when most of us would never attempt a backflip, especially off a pogo stick on live television.

The backflip came during a raucous final number at the end of the show Tuesday night. This segment -- billed as “The-End-of-the-Show Show” -- featured a troupe of pogo stick performers doing their own backflips and other stunts; flamboyant bartenders tossing bottles behind their backs; dancers; drummers; brass musicians; Harris himself, of course; and a little boy identified earlier in the show as “Little NPH.”

It was a rousing finale to an hour of entertainment that was busy, energetic, wide-ranging in geography (from a studio in Astoria, Queens, to California, with points in between), creative and … wait for it (a Harris catchphrase from “How I Met Your Mother”), very successful.

Whether this live variety-palooza emerges as a must-see, and more to the point, DVR-proof experience for millions every week remains to be seen.

But from an entertainment standpoint, there was a lot to like. The show had audience-participation bits, prize giveaways, elaborate pranks played on celebrities and civilians alike, a touch of magic and one high-altitude stunt.

Incredibly, the thing worked. One big reason was Harris himself. He’s game for anything, and has the talent to pull anything off.

Why declare this show a success? Because it delivered on its promise to present creative prank segments and stunts that would be unlike anything seen before on TV. And for all intents and purposes, that’s what happened.

In one prank segment, Harris introduced a newlywed couple from Tuscaloosa, Alabama who were in the studio audience, brought them onstage and then revealed that he had secretly attended their wedding several months previously and had the photos and video to prove it. For being good sports, he gifted them with an all-expenses paid vacation to a Sandals resort in Antigua.

In another prank, Harris -- in prosthetic facial makeup, wig and glasses -- masqueraded as the fictional host of “The Voice: Austria” and completely fooled the stars of “The Voice” (the American one on NBC).

In another segment, Harris brought out singer Gloria Gaynor for a karaoke contest in which three families were seen in their homes (in South Euclid, Ohio, Old Hickory, Tenn., and San Antonio, Texas) singing along with Gaynor as she sang her best-known hit and karaoke staple “I Will Survive.” The singers who knew the words won $1,000 (two out of three families won the money).

Later in the show, the action moved outdoors to the street outside of Kaufman-Astoria Studios in Queens, where a structure had been built for a “skyscraper” challenge that would pit Harris against guest star Reese Witherspoon in a climbing race to the top, followed by a final leg in the race: A quick trip back to the ground on a zip line.

The most striking thing about this stunt was that it was real. This structure was very high (it was held aloft by a giant crane) and the effort the two had to expend to climb to the top of it was considerable. And even though they were fully harnessed and helmeted for safety (understandably), it came across as an edge-of-your-seat viewing experience anyway.

Was the show DVR-proof? Well, I can only speak for myself on this. Having something else to do Tuesday evening, I watched a DVR recording of “Best Time Ever” on Wednesday morning and, as many do, fast-forwarded through most of the commercials. But next week, I hope to watch the show when it airs. It’s that good.

It should be noted that a number of sponsors got mentions within the show, particularly during a quiz segment in which an audience member was given an opportunity to win more than a dozen prizes provided by sponsors such as Jeep, Hilton, Kohler, Sharper Image and an online florist called Passion Roses. The contestant won about a half-dozen of the prizes, including a Jeep Wrangler Trailhawk.

The bottom line on “Best Time Ever” is this: Bravo, NBC. You did it. I can’t wait to see what you and Neil Patrick Harris have cooked up for next week.