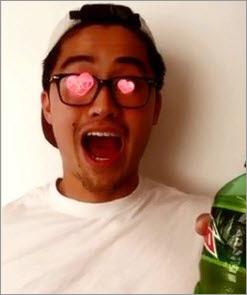 In keeping with its growing rep for pushing digital and social media boundaries to engage with its core audience of young males, Mountain Dew is one of the first brands to use Snapchat's latest update, Lenses.

Lenses, introduced on Sept. 15, recognizes a user's face during selfie snapping. With a tap and swipe, users can then add lenses that produce animated effects on their facial images, such as monsters, rainbows and hearts. (Mtn Dew fan example shown.)

Mountain Dew, currently showing 172,000 followers on its Snapchat channel, made a major splash with a Snapchat story campaign timed for the 24 hours preceding this year's Super Bowl.

Fans were encouraged to view original Snapchat videos from the brand, then choose and take "Kickstory" screenshots and post them with #Kickstart in order to determine the direction of a story that ended with a Super Bowl pre-game party. The story featured social media stars Jerry Purpdrank, David Lopez and D-Trix.