StubHub Focuses On The Inner Fan 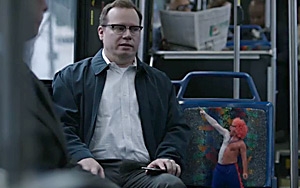 StubHub users know there’s a rush that comes with securing tickets to a hot sporting or music event. In a new marketing campaign, the company asserts that rush comes from an (often obnoxious) inner fan that lives inside of everyone.

The new campaign does away with its Ticket Oak character (an anthropomorphic tree with tickets for leaves), in favor of putting a focus on its users. The shift is intended to depict less about what the company does, and more about how it benefits consumers, says company representative Alison Salcedo.

“We’ve moved on [from the Ticket Oak], so that we could speak more directly to our users,” Salcedo tells Marketing Daily.

Anchored by two new television spots (from StubHub’s agency Duncan/Channon in San Francisco), the campaign depicts people getting the event tickets they want through the StubHub marketplace, which in turn reveals a piece of them that may be inappropriate in certain settings. In one spot, for instance, a man on a bus acquires tickets to see his favorite sports team in the playoffs (for which he quietly exclaims, “Boo-yah”). This releases his “inner fan,” a shirtless, wig-wearing, body-painted version of himself loudly proclaiming allegiance to the team. Other passengers on the bus deem the presence of the fan inappropriate, to which the man simply explains: “It’s the playoffs.”

A second spot depicts a woman’s inner country music fan prancing around on an office conference table, knocking over coffee and disrupting a meeting.

“Our goal is to connect StubHub with our customers’ passions,” Salcedo says. “We let fans do whatever they want with their tickets. This theme speaks to that.”

The campaign comes as StubHub celebrates its 15th year of existence. Fall is typically the company’s busiest season of the year (thanks to a convergence of four major professional sports events), which is why the campaign is launching now, Salcedo says.

“Fall — especially October — is our busiest time of year,” she says. “[But] the campaign is so broad we are able to apply it to different events and [run it] through all times of the year.”

In addition to the television commercials, the campaign will include digital (including takeovers of the ESPN.com home page during seven Monday Night Football games), social and audio elements. In October, Stubhub will also release an online-only video intended for social advertising and sharing, Salcedo says.