Sometimes I Want To Be An Ostrich 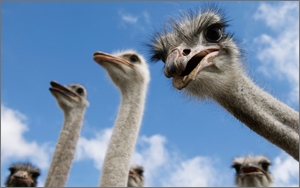 While standing in the checkout line at Whole Foods last week I overheard a conversation between the woman in front of me and the gentleman clerk at the cash register. "I sometimes get emails from grocery stores for discounts on products that I always use, but I don't understand how they know I need these items," she says to the store clerk. He replies, "You don't know the half of it."

Do I blurt out how the grocery stores know, or do I let the two complete their conversation and part ways? They smile and say their goodbyes. I bite my tongue and hold my breath for 60 seconds, which I rarely do, to keep from trying to explain the complicated scenario she simply describes.

I've been a huge proponent of online purchases, but I'd rather not know about all the malvertising going on. I would just rather the industry develop ways to stop it and protect consumers.

When I see all the reports of phishing and malware across email, search, display and video, I begin to think twice about visiting publisher sites, clicking on advertisements, and buying products online.

Last evening I received a note from Malwarebytes that Realtor.com became the latest victim of malvertising. Jerome Segura, senior security researcher at Malwarebytes, says the same attackers behind other recent high-profile malvertising attacks on eBay are behind this one too.

Rogue advertisers have put a lot of effort into making ad banners look legitimate by promoting real products or services. The use of SSL to encrypt Web traffic is becoming more common in the fraudulent ad business, and that only makes tracking fraud more difficult.

Here is some good news for publishers and consumers that I also heard: Fraudlogix, a provider of traffic monitoring solutions, is issuing their Register of Top Performers, which singles out publishers who fight and beat advertising fraud. The sites on the list had a maximum of 6% non-organic paid traffic, or 94% organic traffic.

Fraudlogix's data scientists mined the company's massive fraud database -- which includes data collected from 362 million unique users monthly -- for any sites monitored with significant frequency that historically present minimal to no fraud or fake traffic, which is free of bots, scripts and other non-human forms of traffic.

With Fraudlogix's technology scoring sites between zero and five, with zero denoting the lowest percentage of fraudulent traffic, all of the Top Performer sites had a score of zero. Some 500 sites were selected at random from those that fulfilled the criteria. The top-performing sites are listed here.

What's my point to all this? Spread the word. Educate others. Share what you know even if the listening party's eyes gloss over in confusion. Sooner or later they'll get it. It's the only way to clean up the mess and keep online purchases and browsing safe. (Thank you for your time and allowing me to rant.)

big data, malware, search
1 comment about "Sometimes I Want To Be An Ostrich ".
Check to receive email when comments are posted.
Next story loading