T-Mobile Continues Jabs At Other Carriers 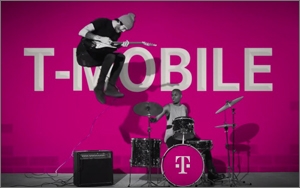 T-Mobile continues to be the thorn in the sides of the other three national wireless carriers, the company is aiming its “Uncarrier” positioning at Verizon.

Poking fun at Verizon’s recent “Come home to Verizon” campaign (which has featured geese migrating home because of poor cell phone service) and the company’s claims of the nation’s “best” network, T-Mobile has launched a new ad showcasing its own network improvements, and asserting they’re just as good as Verizon’s.

“We won’t stand by while Verizon tries to convince the world that their network — which is slower than ours and has less capacity — is the best on the planet,” Peter DeLuca, senior vice president of brand advertising for T-Mobile, tells Marketing Daily. “This ad is calling them out and bringing to light the fact that Verizon customers keep flocking to T-Mobile because we have the nation’s fastest — and fastest growing — [network].”

The ad begins with shots of mountaintops and valleys with an intentionally over-pretentious voiceover proclaiming: “There’s a network that never stops improving, covering every American. And these geese. But it’s not who you think.” Suddenly, the image breaks to reveal T-Mobile’s signature magenta colors to showcase the brand’s network improvements.

T-Mobile has “more than doubled the square miles” of its coverage and is on track to reach another 350 markets with its advanced LTE network, DeLuca says. “Now, we reach nearly every American,” he says. “We are expanding so fast that we cover an additional quarter million homes every week.”

The jabs at Verizon are part of the Seattle-based carrier’s “Never Settle For Verizon” effort launched earlier this year, and included the opportunity for Verizon customers to port their numbers to T-Mobile for a 2-week trial. DeLuca notes it’s all part of T-Mobile’s “Uncarrier” strategy to be disruptive in the market. (Verizon recently launched a brand campaign touting its network strength under the tagline, “Better Matters.”)

“We work hard to have a direct and honest voice with consumers about the state of the wireless industry,” DeLuca says. “That means we also call out the competition when they try to convince consumers that 'better matters,' but then ignore the fact they punish their own customers all the time with charging overages, crazy international rates, repossessing their data each month, and more.”