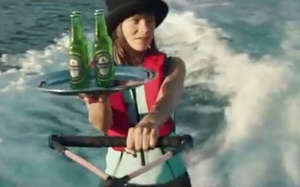 Heineken is kicking off the 17th year of partnering with the world’s most famous spy, James Bond.

In anticipation of the Nov. 6 U.S. release of the latest Bond film, “Spectre,” the beer brand is planning a slew of tie-ins and promotions.

The campaign is the brand’s “most innovative ever,” says Ralph Rijks, Heineken USA senior vice president of marketing, and is the brand’s largest global marketing platform of 2015.

Along with the film integration of James Bond enjoying his go-to beer, a new TV commercial, limited edition bottles and a Fandango contest are launching. In November, the world’s first selfie from space, nicknamed the “Spyfie,” will also be commissioned.

The TV spot, “The Chase” stars Daniel Craig as Bond and features a high-speed boat chase. Heineken commissioned the same “Spectre” cinematographers and stuntmen for the spot. Also featured is actress Zara Prassinot, who is not in the movie.

The spot, from Wieden & Kennedy, Amsterdam, launched Sept. 21 on Facebook, followed by TV and cinema screens worldwide 24 hours later. Heineken is the only Spectre partner who has created a television commercial starring Craig.

The over-the-top spot features a quick cameo of a lookalike of the deceased actor Hervé Jean-Pierre Villechaize, whose best-known role was Mr. Roarke's sidekick “Tattoo” in the “Fantasy Island” TV series. Watch for him in the audience of the wedding ceremony that gets side-swiped by the chase. Villechaize also played Nick Nack, an evil henchman in the 1974 Bond film "The Man With the Golden Gun."

The bottles feature a scannable logo on each, unlocking free movie tickets with Fandango (one in seven wins). Consumers can use their mobile phones to visit www.Heineken.com and scan the front of any Heineken Bond Limited Edition Packaging to see if they have won.

Finally, in November, Heineken will take the world’s first ever selfie from space. Nicknamed the ‘Spyfie’, Heineken has partnered with Urthecast to take ultra HD imagery using its camera on the Deimos satellite, currently in orbit 600km above the Earth’s surface.

Via a relay of technology, Heineken will take a selfie photograph of lucky attendees specially recruited from around the world, who will also take part of an exclusive Spectre screening event in a secret location. The Spyfie content will be bespoke for each attendee of the top secret experiential event, and will be sent to their mobile devices for use on social media.