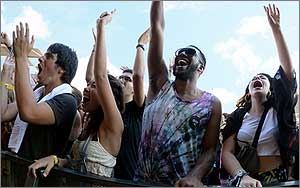 Vevo is about to release a new study of its millennial music audience that points out, among other things, that millennials say they are remarkably “genre” free.

34% of them say they pick and choose amid many music types, although 25% are just locked into one kind.

The new Music Fan Report attempts to define what that wily millennial demo is all about, based on qualitative, in-person interviews with 2,000 viewers.

With over 12 billion monthly views, a library of 150,000 music videos and a full boat of live concert performances, not all of these findings might have led to any corporate gobsmacking at Vevo. But here and there, some finds are the type that make you go... hmmm.

Maybe that does make sense: 26% identify themselves as “country super fans,” just one percentage less than “rock superfans.”

In relevant measures, music fans trust or have “deepest connections” with music stars more than Hollywood celebs or Internet personalities (who don't get much respect in this report, as talent, or as potential product-hawkers). It says 51% of these millennials think musicians have the “most talent” though, really, I was surprised that millennials are generally not overly impressed with anybody.

Maybe they really are mavericks that way.

As a group, Vevo points out, millennials report they watch more Netflix than they do cable, though for Vevo (an eye outlet in an ear business) the point seems to be that “visual content” is doing well with this age group. (Another chart shows the upticks for Instagram, Snapchat and less so, Vine.)

Probably the most interesting part of this study to a former music geek is Vevo’s classification of the “millennial music tribes.”

*Talent Scouts look for what’s new. They want to hear it first, and as such they’re more into new than they are into any particular genre. They are usually men 25-34; 30% of them are married. They’re also the richest, with an average salary of $75,000.

*Front Row Fans know the lyrics and they’re always listening but they’re not often buying music. The spend the least on music tech services. They’re usually females, aged 18-24, and they earn the least of the four types of categories, just $48,000 a year. (But also, they’re likely to be students). They’re good Vevo and Spotify users, and heavy users of social media.

*Crowd surfers are passive types, “functional over emotional” music fans who like to say their music taste is eclectic. They are usually out of the loop and don’t own a lot of music. They consume over wide array of musical services and brands. They’re also older (25 to 34) and most likely to be parents. Basically, it sounds like they have FOMO but it doesn’t seem to drive them as crazy as Talent Scouts would be for not knowing what’s happening.

*Soloists zone out on favorite artists, get lost in the music and “live in their own world.” They’re 18 to 24. They fixate on artists they like. They don’t share much or listen to Pandora (that makes sense) but they’ll spend a lot on their favorite artists. Back awhile,  I suspect they would have been Keith Jarrett fans. Then maybe Afghan Whigs? Arcade Fire? Now, maybe Drake? Vevo says, “Those who are employed [are] making an average $62K.” I like a little snark built into research.

The Vevo data lets you imagine interesting ways to reach (or in reverse, repel) each of these kinds of fans; it would seem that Vevo has to wonder about that at times, too because it's hardly a solidly-the-same bunch.

I don’t think Vevo is saying other young people at other times have been much different. But I’d guess the community of music fandom is far different than it’s been in the past because Vevo (and YouTube generally) and other social media make it so much easier.