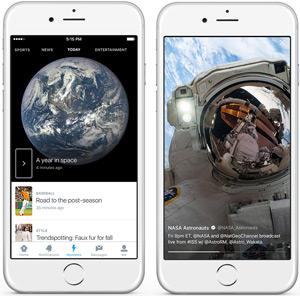 Formerly named Project Lightning, Moments is squarely aimed at the millions of consumers who have yet to embrace Twitter in its current -- and what many call confusing -- form.

Twitter has a team of editors creating Moments, and is inviting a number of publishing partners to do the same.

Critically, Moments doesn’t require users to curate their own feeds by following particular people or publications. Rather, users can browse content by story subject or general topics like “sports” and “entertainment.”

Rather than presenting tweets in the traditional reverse chronology timeline, meanwhile, Moments highlights the most visually compelling images and video in full-screen mode.

Madhu Muthukumar, who is heading up the Moments initiative, says Twitter is loaded with interesting content. “We know finding these only-on-Twitter moments can be a challenge,” Muthukumar admits in a new blog post. “But it doesn’t have to be.”

Distinguished by its own lighting bolt icon, Moments now has its own tab on Twitter’s mobile app. Tapping the tab will open a list of timely Moments.

Dedicated to any news story or subject you’d find in a typical news publication, each Moment has its own headline and teaser, and likely includes some combination tweeted texts, images, auto-playing videos, Vines, and GIFs.

For The Washington Post, Moments was a no-brainer, according to Cory Haik, executive director of emerging news products at the publisher. “The combination of speed, ease of use and rich visuals, in addition to Twitter’s extraordinary reach, are what drew us to the project,” he stated.

The launch comes just a day after Twitter made Jack Dorsey’s return as CEO official. On the news, Dorsey tweeted: “Our work forward is to make Twitter easy to understand by anyone in the world, and give more utility to the people who love to use it daily!”

Briefed earlier this year on what was then named Project Lightning, many on Madison Avenue have been looking forward to the service.

“With Project Lightning, Twitter has an opportunity to appeal to non-users, lapsed users or skeptical adopters to download the application and log on during those moments,” Matt Wurst, vice president and general manager of social media at 360i, recently said.

Marcus Krzastek, vice president of core product at social-centric ad agency VaynerMedia, agreed that the service had big potential. “If it's able to encourage greater viewership around those events, it hopefully will incentivize activity around them (given the increased likelihood of lots of folks seeing your tweets).”