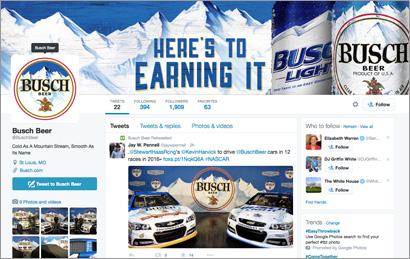 Anheuser-Busch’s Busch brand is returning to NASCAR in 2016 by sponsoring Kevin Harvick and the No. 4 team of Stewart-Haas Racing.

Busch is expanding its social media presence by launching the brand’s first-ever Twitter handle. Starting today, consumers can follow @BuschBeer and use the hashtag #BuschIsBack.

The NASCAR relationship will include select races beginning with the Sprint Unlimited at Daytona (Fla.) International Speedway on Feb. 13.

Busch, Busch Light and other special-edition Busch paint schemes will be featured on Harvick’s No. 4 Chevrolet SS for 12 races in 2016.

Marketing initiatives linked to NASCAR will include on-track, experiential, in-market and retail activations during the 2016 NASCAR season. TV spots will also air leading up to the season and during races.

This announcement is the ideal time to launch the Twitter handle, says Chelsea Phillips, director of value brands, Anheuser-Busch.

“We can start with compelling content and engage with the robust NASCAR fan base, including the followers of Kevin Harvick and Stewart-Haas Racing,” Phillips tells Marketing Daily. “We’re all about finding everyday people who reward themselves with a cold one at the end of the day, and the Twitter platform gives us another avenue to engage with these folks.”

The brand’s involvement with NASCAR began in 1978, she says.

“We think this sponsorship will resonate strongly with racing enthusiasts,” Phillips says. “We’re in an ideal position to leverage our rich history in the sport in a comprehensive marketing campaign which engages both racing fans and Busch drinkers alike.”

The brand’s marketing efforts already focus on its long-running association with outdoor pursuits, she says.

“We’re looking forward to exploring the natural synergies that take place across our interests in NASCAR, hunting and fishing,” Phillips says.