'NYT' Doubles Down On Digital 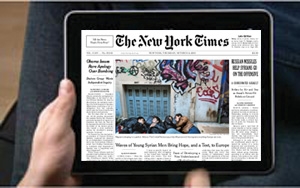 As it looks to the future, The New York Times is focused firmly on mobile devices and social media, according to NYTCO CEO Mark Thompson and NYT executive editor Dean Baquet, who laid out their vision for the rest of the decade in a sweeping strategy memo to staff circulated on Wednesday.

Baquet also announced major changes in the way the NYT will produce and distribute content on the editorial side.

By the end of this decade, NYT aims to have more than doubled its digital-only subscription base, currently numbering around 1.1 million, the NYT bosses wrote, while also doubling its digital advertising revenues from $400 million to $800 million over the same period.

The memo, also signed by a number of editors and executives, admitted that the company has a long way to go toward these goals, conceding, “We need to move with much more urgency. For all that we’ve accomplished, our digital business is not yet close to supporting the scale of our ambitions.”

Above all, like other newspaper publishers, NYTCO remains too reliant on print ad revenue, they acknowledged, putting its long-term health in jeopardy. “We must succeed if we are to return The Times to a position of growth and outpace the slow but inevitable decline in print.”

Mobile devices will be central to this enormous task.

In one of the memo’s most memorable paragraphs, they authors evoked a morning ritual familiar to many: “Our overarching aspiration is to cultivate another generation of readers who can't imagine a day without The New York Times. Our first 2 million subscribers -- including our more than 1 million newspaper subscribers -- grew up with The New York Times spread out over their kitchen tables. The next million must be fought for and won over with The Times on their phones.”

The strategy isn’t limited to mobile. The memo also pointed to more live events like conferences, as well as services, like its popular branded travel business. However, all these initiatives rest on one key element: reader loyalty.

This means fostering a closer relationship with readers, extending beyond merely delivering news to touch other aspects of their lives, in order to build loyalty. That includes tailored delivery of content based on readers’ locations and interests, to more lifestyle and service content -- including for example its popular Cooking app, which has been so successful it will serve as a model for similar service channels in categories like real estate, health, and film and television.

Building a core group of loyal readers is key to the NYT’s success.

The fact that readers are willing to pay for the content reflects their engagement, making the audience more valuable to advertisers as well.

On that note, the memo revealed that NYTCO is expanding the T Brand Studio, its in-house native advertising operation, into a full-fledged agency. It will provide a broader area of marketing products and services, running the gamut for conceptual work to creation and distribution.

The company will also pursue more targeted, high-profile sponsorships for editorial content where appropriate, without sacrificing the newsroom’s independence.

On the sub side, the NYT may also tweak the price structure for its subscriptions, hinting at the potential for cheaper subs, “Even though it may come with short-term costs.” The company will also invest more in marketing to highlight the value of its paid subscriptions.