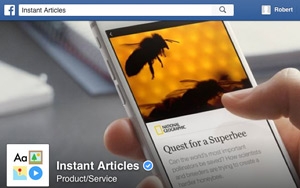 In line with the classic advice to “fish where the fish are,” publishers are embracing social platforms and mobile media along with their audiences, but remain wary of some potential pitfalls associated with these channels, fast on their way to dominating media consumption.

That was one takeaway from discussions on the first day of MediaPost’s Publishing Insider Summit in Asheville, NC, where publishers gathered to discuss the fast-changing media landscape.

Many publishers are entering into distribution partnerships with social platforms and technology firms, and even companies that haven’t signed up for services like Facebook Instant Articles find themselves dependent on giant online firms to reach their audiences.

These relationships have obvious advantages but also present risks, according to Bauer Xcel president Christian Baesler, who responded to an audience question about potential pitfalls by observing: “The biggest threat is the dependency on channels like Facebook.”

(Bauer doesn’t currently publish content on Facebook using Instant Articles, due to its success in generating traffic on the social site organically).

That’s part of the motivation for Bauer’s planned expansion to a transactional business with more direct relationships with consumers, Baesler added.

There was general agreement that partnership with the tech titans holds too much potential for publishers to pass up, on the assumption that the behemoths will (hopefully) find it in their interest to share the profits with the companies that provide them with content.

Doug Harbrecht, director of digital media at Kiplinger, noted: “We made a push into social media, and we’ve seen social media go from 5%-6% a few years ago to 25% to 30%.” However, he also conceded that relying on a third party for distribution “is scary, it’s a scary thing… [but] the wealth will be spread, it has to be spread. We benefit from the rise of technology because technology companies want the Kiplinger’s brand. Google loves us… same thing with Apple News.”

Similarly, Toby Hudson, sales director at Business Insider, said, “We’re launching a site [“Insider”] right now that is 100% socially distributed… For us, the Internet is the publication… that’s the competition. Relinquishing control to Facebook, there is some risk, but for us Apple News, Facebook Instant Articles are areas that we’re going to embrace.”

Likewise, the rise of mobile media also holds potential, as well as pitfalls. Rich Routman, chief revenue officer of Sporting News publisher Perform Media, said mobile offers the biggest opportunity for growth, concentrated in video, but added that these gains come at the expense of traditional display. “The challenge, our video and display revenues have been 50-50. So display is not necessarily headed in a very beautiful direction, while video for us is trending in a very positive direction.”

Hudson added that mobile video still has its own issues with user experience and consumer expectations, citing marketing wisdom that “desktop to mobile is like human years to dog years -- 15 second pre-roll on desktop is like 10 minutes of your life on your phone.”

He emphasized these are technical problems that can be solved: “We need to do advertising better on the platforms. Rather than this model of porting print [display formats] to digital and digital to mobile, it needs to be much more native to the environment.”

Routman also concluded on an optimistic note that seemed to sum up the tenor of the panel: “The buy and the sell sides will work themselves out. We’re still 12 to 18 months before everyone gets aligned. The content side of our operations is strong. The product side of our operations is absolutely the place where we need to get better… If we can focus our efforts on product, I think we can solve at least 50%-60% of our pain points.”