Harris Gives It His All, But 'Best Time Ever' Ratings Are Elusive 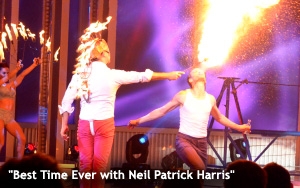 What does a guy have to do to get a rating around here?

You can imagine Neil Patrick Harris issuing this exasperated lament out of camera or microphone range on the set of his live NBC variety show “Best Time Ever with Neil Patrick Harris.” He could be excused for being out of breath while saying it too, since he seems to be making every possible physical effort to put this show across.

Among other things, Harris has cavorted with Blue Man Group, participated in a fire-eating performance (that’s him on the right in the picture accompanying this blog), danced, sung, played elaborate pranks, performed magic tricks, donned umpteen costumes and heaven knows what else. And yet despite his plethora of talents, the show has mediocre ratings and no one’s really talking about it.

The show was highly touted at NBC’s Upfront at Radio City Music Hall last May, and in the ensuing excitement was widely heralded as having the potential to ignite a revival of variety-style entertainment on prime-time TV. And there was the “live” element too. In the aftermath of the Upfront, the show was billed as an innovative, even brave effort on NBC’s part to produce a live “event” TV show that would be so compelling, viewers wouldn’t wait to watch it later by recording it or streaming it, but instead would make an effort to watch it in its time period.

It’s doubtful that anyone at NBC is popping champagne corks over these results. At the same time, however, this show was always billed as an experiment -- and one that is scheduled to run for only eight episodes anyway (ending on Nov. 3).

So why hasn’t it caught on? That’s hard to say. One general explanation might be that audiences aren’t looking for lollapalooza-style entertainment on prime-time TV, no matter how loudly this show clamors for their attention. Maybe they simply prefer scripted shows. As everyone knows, scripted dramas with compelling stories are the only TV shows anyone seems to talk about these days.

One weakness might be the show’s choice of guest celebrities who participate in various bits and performances with Harris. Certainly, there have been appearances by such stars as Gloria Estefan, Cee Lo Green and Britney Spears. But then there have been appearances by the likes of Zachary Levi, Seth Meyers, Matt Lauer and Savannah Guthrie -- all booked obviously because they are NBC personalities. Levi is in “Heroes Reborn” this season on NBC, in case you didn’t know.

One show even featured Bravo’s Andy Cohen and reality-TV trainwreck Bethenny Frankel, two people who are not exactly a challenge to book on a TV show. Nor are they likely to drive viewership either.

What’s the bottom line? Probably this: A new era in TV variety is not likely to be jumpstarted based on the results for “Best Time Ever.” But NBC should be credited for trying this. As for Neil Patrick Harris, his showmanship remains beyond reproach, except for one thing -- his multiple talents didn’t bring in the crowds. What’s a guy have to do to get a rating? That’s still a mystery.

ratings, tv
5 comments about "Harris Gives It His All, But 'Best Time Ever' Ratings Are Elusive ".
Check to receive email when comments are posted.
Read more comments >
Next story loading