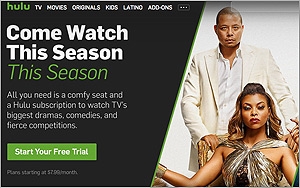 The wait is over -- Hulu’s programmatic advertising went live yesterday.

The company announced the platform with an explanatory video on its blog. Oracle will handle the “pumping and flowing” of information using first-party and third-party data, while Yieldex will “think and forecast various scenarios” for inventory management.

Facebook-owned LiveRail is providing a “safe passageway for data to enter and exit campaigns.”

An ad frequency cap will be maintained through the process, and the company will not add real-time bidding.

The streaming service teased its programmatic offering in August, shortly before its commercial-free plan was introduced in response to people canceling their Hulu subscription (or not signing up at all) because of ads.

With competitors Netflix and Amazon offering ad-free plans, some advertisers wondered what their place was in Hulu’s future. Hulu CEO Mike Hopkins quelled those fears at the IAB Mixx conference. He said most new subscribers are going with the lower-priced ad-supported tier, and called advertisers “heroes” for making the cheaper plan possible.

Hulu, owned by Fox, NBC Universal and Walt Disney Co., offers subscriptions for $7.99 per month or a commercial-free plan for $11.99 per month. Brands who have advertised with the service include Johnson & Johnson, Visa, Pepsi, Microsoft, Verizon Wireless, Honda, State Farm and Allstate.