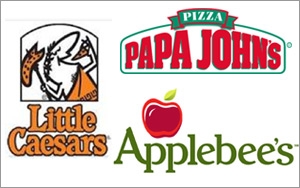 In a new study on word-of-mouth marketing, some of the highest-scoring TV advertising brands are all about eating.

Seven of the top 10 most talked-about brands, based on its TV advertising, are food and restaurant related, according to a new study from word-of-mouth researcher Keller Fay Group.

The top three brands based on TV advertising are Papa John’s, Little Caesars and Applebee’s. Also on the list are Red Lobster (fifth place), Olive Garden (8th place), Jack in the Box (7th) and KFC (10th).

With regard to specifics around Papa John, the pizza-based company, one-third of its positive conversations included a discussion of its TV ads. It also said that NFL player Peyton Manning and Papa John’s chief executive officer who appeared in commercials fostered conversations.

Maggie Merklin, SVP at Analytics Partners, stated: “The research found that it is not necessarily the amount of advertising that a brand does, but rather it’s the quality of the creative, that tends to spark conversations.”