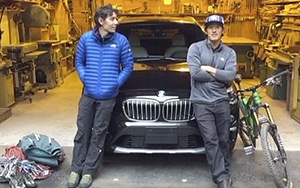 BMW has been experimenting with mobile video streaming app Periscope, a service that lets users “like” videos by sending heart icons, and lets users choose who can or can’t see the content. The first campaign the automaker did on the app was for the launch of the M2 performance car.

The second effort was this past week, on Oct. 28, aimed at promoting the X1 sports activity vehicle. This time, it engaged people directly: based on vote, those who watched the #X1WhatsNext campaign were able to determine what happened during the course of a 24-hour adventure, an outing that featured a pair of famed climbers, one a top documentarian in his own right.

The timing was good -- coming as it did just as the highly touted documentary “Meru” shot by climber and filmmaker Jimmy Chin is in theaters and festivals, and will be a shoe-in for an Oscar nomination. BMW’s campaign, in which Chin and famed solo free climber Alex Honnold drove the X1 into the wilderness for a day, used live voting by fans on Periscope to determine the actions the two took, starting with whether they would mountain bike or climb (they did the former).

In addition to the Periscope live streams, the effort, via New York-based KBS (Kirshenbaum, Bond, Senecal and Partners), included tweets and instagrams from Chin (@jimkchin and jimmy_chin, respectively), and Honnold (@AlexHonnold and alexhonnold) throughout the day on BMW USA’s Periscope and Twitter channels.

Peter Harmata, digital innovations manager at BMW of North America, tells Marketing Daily that both the M2 and X1 campaigns have the potential to go beyond the live-video Periscope timeframe because of the captured video. The M2 campaign involved six cameras, the X1, three. In the case of the former, KBS shot Matt Mullins, chief driving instructor at BMW Performance Driving School in South Carolina, doing hot laps on the Spartanburg, S.C., track.

Harmata says that, for X1, the key was finding the right influencers, “best in class in their worlds.” He said Honnold and Chin were looking for an interesting opportunity. “We asked them if they would share on their own channels with their followers about us and program. They were more than willing to do that.”

Jonathan Mackler, co-CCO at KBS, says that Periscope followers could control things like who would drive the vehicle, which route they would take in the outback near Lake Tahoe, Calif. “It had the feel of a video game.”

Mackler and Kelleher, and possibly Harmata, will talk about, and show footage from, the campaign at MediaPost’s inaugural Marketing Automotive conference on Monday, Nov. 9, in New York.