Breakthroughs In Science Are Explored In GE, NatGeo Co-Production 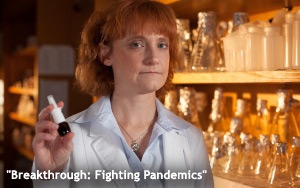 The series is called “Breakthrough,” and the first installment airs Sunday night (Nov. 1) at 9 Eastern on NatGeo. The subject of the premiere -- subtitled “Fighting Pandemics” -- is infectious disease and the battle to contain potential outbreaks. Exhibit A is the ebola epidemic in West Africa.

It is an unflinching documentary with footage of quarantined ebola patients (both living and dead) shot inside squalid hospital wards that is so up close and personal that you might wonder how the camera crews survived.

This episode was directed and narrated by Peter Berg. The “breakthrough” of the show is an ebola vaccine being developed by a scientist at the University of Texas -- Dr. Maria Croyle (seen with a vial of her vaccine in the photo above).

Of the six episodes, “Fighting Pandemics” is by far the grimmest, due mainly to its emphasis on death and blood (it flows copiously throughout the show). While portions might be difficult to watch -- at least for some -- it is nevertheless a brave show that pulls no punches.

The other five shows are decidedly less bloody. In fact, blood doesn’t figure into any one of them. The second episode in the series, “More Than Human” (Nov. 8), is an exploration of breakthroughs in the development of advanced prosthetics and related cyborg technologies. It is as uplifting as the ebola episode is alarming.

Actor Paul Giamatti is the director, narrator and star of this one, as he goes in search of advancements in prosthetic technology and meets a series of scientists and engineers involved in “the fusion of biology and technology” or as the show puts it, “hardwiring machinery to human brains.”

Brain science happens to be the subject of Episode Three, “Decoding the Brain” (Nov. 15), directed by Brett Ratner and narrated by Adrien Brody (who has a mesmerizing gift for voiceover work of this type). Among the areas explored: The potential for erasing bad memories.

Episode Four, titled “The Age of Aging” (Nov. 29) seems perfectly matched to its director and narrator, Ron Howard, a personality who many of us have known since his early childhood. Little Ronny Howard is even seen in the show in a brief clip from “The Andy Griffith Show” in which he comments on a spiel being delivered by a snake-oil salesman hawking a youth tonic to the residents of Mayberry. Says wise Ronny: “It’s just another commercial.” Meanwhile, Aunt Bea is seen offering to buy two bottles of the miracle elixir.

More seriously, the episode deals with the science of aging and efforts to not only extend lifespans but also to battle the diseases most prevalent in old age such as cancer, diabetes and heart disease so that a typical person’s old-age experience may not have to consist mainly of facing a series of health problems in his or her final years.

Howard is also an executive producer of the series, along with Brian Grazer, his partner in Imagine Entertainment.

In Episode Five, titled “Energy From the Edge” (Dec. 6) -- directed by Akiva Goldsman and narrated by Jason Bateman -- alternative sources of energy are showcased that actually seem like they have the potential to work. Among the innovators seen on the show is Eric Fitch, who has figured out how to reuse wastes produced in the process of brewing beer by turning it into fuel and using it to power a brewery -- in this case the Dogfish Head brewery in Delaware.

Episode Six has the most attention-getting title in the series -- “Water Apocalypse” (Dec. 13). The episode posits that the world and its growing population is running out of drinkable water. Actress Angela Bassett directs and narrates the show, and appears in it briefly.

Efforts in some parts of the world to produce pure, drinkable water from household waste water and seawater are showcased, but the point is made that purifying ocean water -- although it’s technologically possible -- remains an economic challenge due to its high costs. Among its costlier aspects: Desalinating ocean water may be advantageous for those who live near oceans. But for those who live thousands of miles from any seashore, the cost of transporting water over great distances becomes a huge problem.