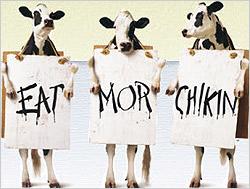 Chick-fil-A, Hobby Lobby and Interstate Batteries are the leading brands in the inaugural “Faith Equality Index.”

Rounding out the top seven companies are Tyson Foods, Cracker Barrel, Walmart, and Thrivent Financial, according to Raleigh, NC-based FaithDrivenConsumer,com, a Web site that aims to help consumers make choices based on Christian values.

“The Faith Equality Index (FEI) affords the marketplace a transparent tool to measure where brands stand,” says Chris Stone, brand strategist and founder of Faith Driven Consumer, adding that “many brands still have a long way to go” and that his company would be “diligently working with all brands as they seek to understand and embrace this key constituency.”

Stone says there are 41 million faith-driven consumers who spend $2 trillion annually and are driven by their biblically based worldview in daily purchasing decisions, including consumer and entertainment choices. The index is the result of more than four years of research and behind-the-scenes work with major brands, he says.

According to national research firm American Insights, 93% of Faith Driven Consumers see value in a resource that allows them to easily identify the faith compatibility of brands, 86% are more likely to do business with a brand that welcomes them and acknowledges their values, and 70% are actively seeking faith-compatible brands.

A 100-point scale rates how well brands “acknowledge Faith Driven Consumers (FDCs) by welcoming, embracing, and celebrating them. The top finishers have made headlines because of the beliefs and practices of their top executives.

Chick-fil-A, with a score of 63 out of 100 points, made headlines in 2012 when company President Dan Cathy made a series of comments opposing same-sex marriage. The company’s charitable foundation, the WinShape Foundation, had donated millions of dollars to political groups seen as hostile to Lesbian-Gay-Bisexual-Transgendered causes. LGBT groups called for protests and boycotts of the fast food chain. The chain is closed on Sundays due to Cathy’s Christian religious beliefs.

Hobby Lobby, which finished in a close second with 62 points, also is closed on Sunday due to its founder David Green’s religious beliefs. Green has taken a public stance against the Affordable Care Act, citing its inclusion of a provision mandating that companies provide access to the morning-after pill, an emergency contraceptive.

Interstate Batteries, with 61 points, has a mission statement that states that it exists “to glorify God” while selling its products. Tyson Foods, with 60 points, embraces spirituality in the workplace. Founder John Tyson speaks openly about his Christian beliefs, and the company's core values say that it "strive(s) to honor God" and "be a faith-friendly company."

Cracker Barrel. with 53 points, was the subject of controversy during the 1990s due to its official stance against gay and lesbian employees and for alleged discriminatory practices against African-American and female employees. A U.S. Department of Justice investigation found that the restaurant chain discriminated against minority customers. As a result, the company implemented non-discrimination policies.