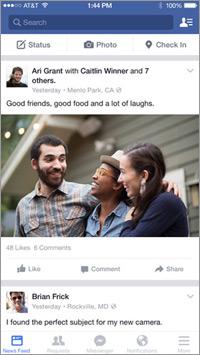 Facebook is testing a new feature that automatically identifies users’ “friends” in freshly taken photos -- before they’ve been uploaded to the social network -- and then encourages users to share those snaps.

Designed specifically for Facebook’s Messenger app, the “Photo Magic” feature searches through the camera rolls of users’ phones with the help of facial recognition technology.

If it recognizes a friendly face, Messenger will then send users a notification encouraging them to send that photo to the featured friend.

According to recent findings from GlobalWebIndex, its users are sharing less content than ever. Over the past year, the share of users updating their status is down from 50% to 34% -- while the share of those posting pictures is off from 59% to 37% -- the market research firm found.

“This is one of our upcoming features I'm really excited about, as it's still way too difficult to share photos with friends, and receive all the ones you're in,” Marcus said in a Facebook post, on Monday. “Currently testing in Australia, and if all goes well, available in the U.S. soon!”

In tests, people with Android phones are receiving alerts every time “Photo Magic” matches a face to a friend, while iPhone users are getting the alerts sporadically.

For the new feature to work, users have to give Messenger access to their camera roll. They also have the option to turn off the send-to-friend notifications, as well as Facebook's facial recognition feature.

Among other efforts, Facebook recently teamed up with Spotify and Apple Music so users can more easily share their favorite music with friends.