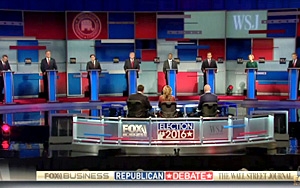 Fox Business network posted solid viewership results with the latest Republican Presidential Debate -- but the lowest of the four events so far.

Nielsen estimates are that Fox Business, the 8-year-old channel, pulled in around 13.5 million viewers.

This would be slightly down from the third debate on CNBC, the NBCUniversal business network, two weeks before -- which pulled in 14 million last month, and a record for that channel.

Sister channel Fox News Channel grabbed a surprisingly 24 million viewers in August for the first debate. Then CNN in September followed up with a virtually strong 23 million.

Fox Business is not as widely distributed as other cable networks -- in 74 million cable, satellite and/or telco homes.

But for the debate, pay TV providers, including DirecTV, Suddenlink, Mediacom, Frontier, Wide Open West and Cable One, along with a National Cable Television Cooperative member companies, made the channel available to their full subscriber base.

The latest Republican Presidential debate had eight candidates versus the 10 or more candidates at the lecterns in previous debates.