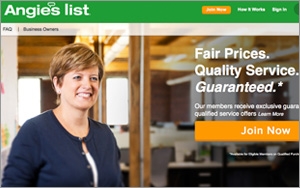 Angie's List Wednesday told Media Daily News that it had received an unsolicited proposal from IAC/InterActiveCorp to acquire the company for $8.75 per share in cash, an Angie's List spokesperson confirmed.

IAC also indicated its willingness to consider a combination of Angie's List with IAC's HomeAdvisor business through a tax-free stock-for-stock exchange.

The two companies also are battling it out online by running search ads on google.com. In one instance, Angie's list served in the No. 1 position, with HomeAdvisor, parent company IAC, serving beneath in the No. 2 spot.

The HomeAdvisor paid search ad reads: Don't Pay For Her List - homeadvisor.com. Her List Will Cost You But Our 5 Star Service is Always Free!

Angie's List Board, in consultation with its independent financial and legal advisors, will review and evaluate IAC's proposal to determine the course of action that the Board believes is in the best interest of the company and all Angie’s List shareholders.

Bank of America Merrill Lynch will serve as a financial advisor to Angie’s List, and Sidley Austin LLP is serving as a legal advisor.

After the close of the stock market today, Piper Jaffray released a research note. The firm maintains its Neutral rating and $6 price target based on our belief that the new "CEO Scott Durchslag and board are committed to righting the Angie's List business before selling at a compressed multiple," wrote analyst Gene Munster. "We expect optimism around a near-term takeout to fade. Reiterate Neutral and $6 price target."