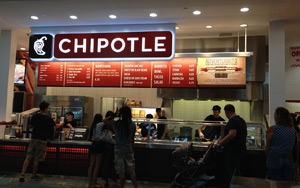 Not surprisingly, at least in the short term, an E. coli outbreak that temporarily shut down 43 Chipotle stores in Oregon and Washington has driven down the restaurant brand's national consumer perception and purchase consideration scores, reports YouGov BrandIndex.

Chipotle's BrandIndex buzz score dropped from +4 on Oct. 30, just  before news of the E. coli illnesses broke, to -19 as of Nov. 9 — the brand's lowest buzz score since YouGov began tracking it in June 2007, according to the research company.

On Oct. 31, Chipotle's daily purchase consideration score was 24% — meaning that 24% of all consumers 18 and older reported that they would consider purchasing from Chipotle the next time they wanted to buy fast casual food. After the E. coli news broke, it dropped to 19% by the middle of the first week in November, and has remained at about the same level since (18% as of November 11), reports YouGov.

Chipotle’s previous 2015 purchase consideration low was 15% at the end of January, when the restaurant chain cut ties with a supplier that didn’t meet it standards, causing a pork shortage that lasted into the summer. YouGov says it began tracking the brand's purchase consideration score about two years ago.