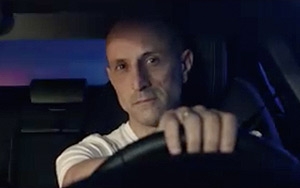 Jaguar is combining a national ride and drive program with an action-film acting gig for attendees. The "Art of Performance Tour," touting the forthcoming XE sports sedan, includes an opportunity for people to test drive the car and to be a transporter in a chase car narrative, where a British kingpin is auditioning potential spies with getaway driving skills.

The two-minute film -- "The Audition," which features actor Graham McTavish as the interviewer -- puts consumers in front of the camera, in the driver's seat of an XE setup, and gives them the film treatment in a chase scene, thanks to film wizardry. Participants also get a a shareable link, using Facebook's new short-video function to upload their clips. After that, they proceed to a drive portion of the actual car, both on a street and on a closed autocross course.

After a brief run in Los Angeles, Nov. 19-22, the tour goes to San Francisco, Dallas, Miami, New York, Washington, D.C. and Chicago, through next spring. Signup for the event is at a dedicated microsite.

The effort is via dedicated Jaguar Land Rover agency, Los Angeles-based Spark 44, with Mindshare managing the media buy. Mindshare Entertainment developed and produced the film with Facebook's Creative Shop Studio, per the company. Automotive Events developed the drive experience for the tour in each city.

Jaguar is supporting the experiential tour with ads on Facebook and Instagram -- targeting Millennials, who are the prospective buyer for the XE, the first-ever Jaguar gateway vehicle. “Everyone on Instagram will see the 30-second trailer, and then we follow up with messaging on Facebook,” says Kim Kyaw, digital marketing and social media manager at Jaguar Land Rover. She tells Marketing Daily that carousel ads on both Facebook and Instagram will show images from the film, and that the distribution of messages about the tour is being done programmatically for all digital display, video and Facebook.

“Programs like ‘The Audition’ lets us really target who we want to be speaking to. Since we don't have a big marketing budget, we have to be really smart, tying digital and experiential together makes a big impact. That's what our Millennial customers are doing in their own lives, as well.”

She says Jaguar will then follow up with product messages. “All messaging will be through social, digital, and CRM, with email followup with people after they have done the experience.” The programmatic element lets Jaguar target people who haven't been through the experience, she notes. “We can talk to people at the moment they are interested, including messaging specifically to luxury enthusiasts or sports car enthusiasts, or even people interested in movies, because of our relationship with the James Bond movies.”

On Tuesday, the automaker also launched an early action incentive program where people can drop a $500 deposit online, after which he or she will be contacted by their retailer. The incentive? The Jaguar Land Rover navigation platform. “It's the first time we have done that kind of a program,” says Kim McCullough, VP marketing at Jaguar Land Rover, who says that, through Jaguar Financial Group, those who sign up also get their first month’s payment taken care of. “There's real currency in being first,” she says. “And we think we have offered a nice way to give them a benefit for putting their money down early.”