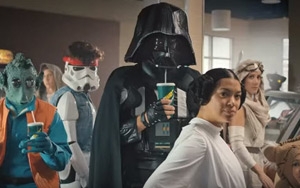 Subway, the exclusive restaurant partner for LucasFilm's "Star Wars: The Force Awakens" promotions, is launching its campaigns in markets around the world.

In the U.S., in the core promotion -- launching Dec. 1 -- consumers can use the Subway app to buy food and beverages, or upload a receipt from an in-store Subway purchase to Subway.com, to qualify for chances to win sweeps prizes that will include Footlongs, Lightsabers, Sphero BB-8 App-Enabled Droids and other prizes.

In the U.S. and other markets, a humorous 30-second TV spot will show a human couple initially looking daunted when they enter a Subway that's filled with characters from the new movie — until the young woman shows her lightsaber.

The end of the spot promotes six collectible Star Wars cups, available with beverage purchases, while supplies last, during the promotional period.

Another 60-second spot focuses on a kids' tie-in offer: Each Fit for Kids Meal purchased will come with a movie-themed Kids Pak consisting of a messenger bag and glowstick lightsaber. There are eight different Paks to collect.

On SubwayKids.com, the QSR is promoting both the Paks and an exclusive "The Force Awakens" puzzle game that can be played by downloading the free Subway Kids' App.