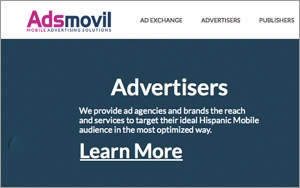 Adsmovil, a Cisneros Interactive mobile ad company, has announced that 8% of the company’s revenue in Latin America comes from programmatic advertising, which the company began offering in July of this year.

Alberto “Banano” Pardo, CEO, Adsmovil, said Latin America offers growth in programmatic because two large countries in the area -- Brazil and Mexico -- are early tech adopters. He added that big brands are aware of the advantage programmatic brings, and that they want to use its capabilities in other countries.

“We believe in Latin America, and we believe that the downturns in some of these countries will be over in two to three years — so now is a great time to invest,” he said.

As for his 2016 predictions, Pardo said he thinks Brazil and Mexico will get the biggest part of the programmatic pie, and that mobile will begin to get traction in programmatic with more advertiser dollars behind it. He also thinks 15% of the total digital spend on display in Latin America will be programmatic in 2016.

In the U.S., programmatic targeted to Hispanics is going mainstream, he said, with more brands buying programmatically.