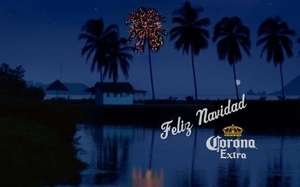 Constellation Brands Beer Division believes the spot, “O Tannenpalm,” is the beer industry’s longest continually running TV spot and one of the longest-running holiday advertisements of all time. The spot has run annually from Thanksgiving through the New Year since first airing in November 1990.

The 30-second commerical opens with a tropical scene at nightfall – tall palm trees along the shore paint a picture of seaside serenity. Crickets, frogs and birds offer a soundtrack to a sleepy evening on the water. The moon and cabana are the only light sources until someone off screen begins to whistle the traditional Christmas song, “O Tannenbaum.”

One of the palm trees is illuminated in vibrant, colorful lights. Text on screen appears wishing viewers “Feliz Navidad” and the scene fades out. There are no actors, dialogue, voiceover or product.

The success of the ad relies purely on the viewer’s connection to Corona Extra’s beach state of mind and the passport to carefree enjoyment, says Jim Sabia, CMO of Constellation Brand’s Beer Division.

“This spot is really a testament to that foundation our marketing team began building nearly three decades ago,” Sabia says in a release. “We’ve stayed the course, and we are so honored this ad has been a small part of Americans’ holiday traditions for the past 25 years and will be for many more to come.”

To celebrate the landmark anniversary, Corona Extra is revealing details never before shared with its fans about the ad in a special behind-the-scenes video on the brand’s YouTube page. It features the original creative director, the story of the original pitch, and on-set secrets.