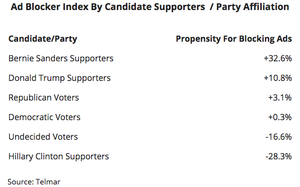 If access to candidates’ digital ad impressions are a factor in the 2016 Presidential Race, Hillary Clinton will have a decided advantage in getting her messages through. Clinton supporters are the least likely to have digital ad blocking software installed on their computers or mobile devices, according to new research from media planning software developer Telmar.

As part of a new media research and frequency planning system developed by Telmar, the company conducted a study of the ad blocker usage of voters and found Clinton’s supporters are 28.3% less likely to use ad blockers vs. the average American voter.

The good news for all candidates is that “undecided voters” -- the kind likely to be the biggest swing factor in the primaries and general election -- are the next least likely to block ads (see chart).

Every other supporter or party affiliation type reported by Telmar indexed above average for ad blocking, though Democratic voters were just a little above average.