'Wall Street Journal' Launches New Magazine 'The Future Of Everything' 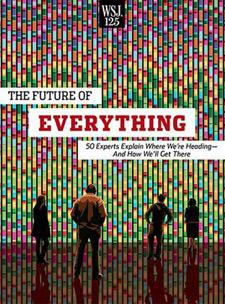 The Wall Street Journal is launching a new annual magazine called The Future of Everything. The magazine will be released in addition to the WSJ’s Dec. 11 edition.

The magazine will cover future trends in a range of industries, from food and travel to sports and technology.

The issue will be 96 pages and carry 26 pages of advertising. Advertisers for the debut issue include BMW, Ralph Lauren and ADP. A number of the advertisers worked with WSJ Custom Studios to produce custom content for The Future of Everything.

“Feedback was so positive that we wanted to build on the idea, so we took the approach that worked there—luminaries explore the future of their field—and built it into a full magazine with deep feature stories, lush photography, a futuristic fashion shoot and even a recipe,” Miller said.

The company is calling The Future of Everything a “standalone,” but Trevor Fellows, head of global media sales, told WWD that he already has designs to make it a recurring print product, as well as plans to launch international editions.

“We’ll certainly do another issue next year,” Fellows said.

The variety of topics covered in the mag has also helped bolster advertising, Fellows said. He added that the best advertising categories were auto, health, finance and tech.

“You’re seeing that the notion that print is destined to fail is becoming irrelevant,” Fellows said. “There’s still a significant number of people who want to engage with print.”

The Future of Everything features stories from Elon Musk’s Hyperloop train to a piece by Howie Kahn on how top chefs are beginning to venture into fast food.

Stan Parish, a former Departures and Bloomberg Pursuits editor, is the editor in chief of the magazine.

Some of the stories featured in the magazine have already begun to roll out online on this microsite, and soon all articles will be available on the web. Online stories include multimedia content, such as video, as well.
future of media, magazines, newspapers, print
1 comment about "'Wall Street Journal' Launches New Magazine 'The Future Of Everything' ".
Check to receive email when comments are posted.
Next story loading