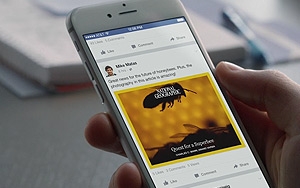 Facebook announced Wednesday the beta launch of Instant Articles, designed to give publishers control over their mobile Web stories, brand experience and monetization options. Some 50 publishers across Asia signed initially and an additional 30 publishers have agreed to begin adopting Instant Articles soon, per the social network.

Publishers in Asia are able to sell ads in their articles and keep the revenue, or they can choose to use Facebook’s Audience Network to monetize unsold inventory. They will also have the ability to track data and traffic through analytics tools.

In the Asia Pacific, Facebook has over 500 million monthly active users.

The average news story takes about eight seconds to load, making it the slowest content type on Facebook. Instant Articles renders the reading experience as much as 10-times faster than standard mobile Web articles, the company claims.

"Instant Articles has been designed with extensive feedback from publishers," stated Andy Mitchell, director of global media partnerships, adding the collaboration would help its partners in Asia distribute "fast, interactive articles to their readers in the Facebook app."

Instant Articles are distinguished with a lightning bolt in the top right corner of a story.

The media format also introduces a suite of interactive features. Publishers can add features, such as zooming into high-resolution photos with a tilt of a phone, auto-play videos on the News Feed, interactive maps, audio captions and the ability to like and comment on individual parts of an article in-line.

Instant Articles first went live in the U.S. in May with The New York Times, BuzzFeed and National Geographic, among its initial partners.

Globally, Instant Articles is now available to all iPhone users. Android will launch the feature later this year.