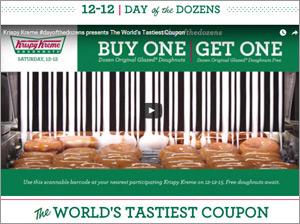 A mobile and online coupon marketing campaign breaking this week, dubbed "the World's Tastiest Coupon," was created for the chain's "Day of the Dozens" promotion. On Dec. 12, all U.S. Krispy Kreme customers who buy a dozen original glazed donuts, and present a coupon, will receive another dozen free.

Krispy Kreme charged its creative agency, Baldwin& (Raleigh, N.C.) with coming up with a coupon that went beyond the normal call of duty, to actually help make consumers crave its sweet pastries.

Solution? A Krispy Kreme glazing machine was customized so that the glaze dripped out to form a barcode. It was then filmed in action, with just-glazed doughnuts rolling out on a conveyor belt.

The barcode in that video footage is actually scannable, so the video — featured on a dedicated campaign page on Krispy Kreme's site — functions as a coupon when consumers show it on their smartphone screens at a Krispy Kreme store.

The site also offers three, 15-second videos that show the making of the video coupon -- and for those who still prefer paper, a printable coupon.

The campaign targets consumers 25 to 54 who are past purchasers at coffee or sweets QSRs, with additional mobile targeting to those located within five miles of a Krispy Kreme store.

Programmatic display and mobile Flash banners, paid Facebook and Twitter advertising, and promotions on the brand's own social channels are being used to drive traffic to the coupon site.