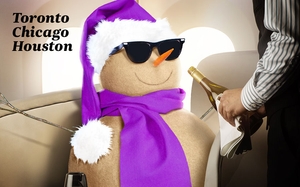 Air New Zealand has launched its #SandmanSelfie tour which aims to bring a glimpse of the New Zealand summer to customers in North America.

The effort, which runs through Dec. 16, invites consumers to enjoy elements of the Kiwi summer. Fans who stop by one of the three #SandmanSelfie locations are encouraged to take a selfie with Sandman and submit pictures on Instagram using #SandmanSelfie and #AirNZ for a chance to win two roundtrip tickets to New Zealand on Air New Zealand*.

The tour lands in Chicago Dec. 12 and 13 there visitors will be able to sample authentic New Zealand cuisine and experience Air New Zealand’s award-winning Economy Skycouch.

It ends up in Houston on Dec. 16 where the “Sandman” will be joined by a choir singing “kiwi-carols.” Guests will also enjoy a traditional Maori kapa haka cultural performance.