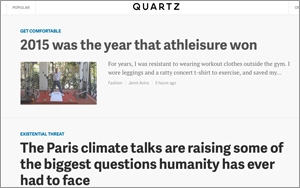 The Washington D.C.-based media company has been holding talks with potential buyers about either a sale or investment in the site, the Financial Times reported and CNN confirmed on Thursday.

The company has met with at least one interested party this month, FT reports. However, this doesn’t signify an immediate transaction. In recent years, Atlantic Media has received several approaches from interested buyers and investors.

Atlantic Media did not identify potential buyers or investors.

"With Quartz's tremendous growth trajectory over the last three years, it shouldn't be surprising that there's investment interest. Given our ambitions for Quartz, we would be remiss in not evaluating opportunities as they arise," an Atlantic Media spokesperson told FT.

Quartz is free to read online and most of its revenues are based on online ads. A source told FT that the site breaks even and generates revenues of about $15 million.

Revenue for the 11 months ended November rose 90% from 2014, according to a spokesperson.

According to the company, the web site drew 15 million unique visitors in November.

Atlantic Media has been showing signs of change recently. In October, the company announced it would rebrand one of its properties, the political publication National Journal, as a premium paid content site. In addition, it shut down National Journal’s print edition and cut a quarter of its staff.

At the same time, the parent company announced plans to expand the political coverage in its flagship brand, The Atlantic, as well as open a new Washington bureau.

Atlantic Media may be slowly trying to unify under The Atlantic. In 2014, it folded its breaking news and culture web site, the Wire, back into the Atlantic magazine’s main site less than a year after launching it as a “digital-first” property.

Quartz, founded in 2012, has grown at a fast pace over the past two years, hiring aggressively and expanding in new regions, such as Africa and India.

It projects as much as 28% of fourth-quarter revenue will come from outside the U.S., compared with 21% at the end of the third quarter.
m&a, online publishing, publishing
Next story loading