Best Show Of The Year? The Republican Debates, Of Course 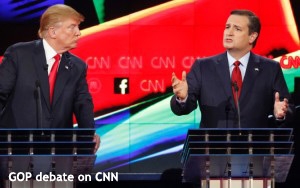 It’s not even debatable: The Republican presidential debates were the year’s top show, hands down, case closed.

No other show was as talked-about this year as the five Republican debates. No other show scored high ratings as consistently as this show. No other show offered the surprises, conflicts and finger-pointing that this show did. No other show -- no drama, reality show, comedy, televised awards show or sports event -- came close to this.

The GOP debates were a drama, reality show and comedy all rolled into one. Perhaps more importantly, the GOP debates were a great example of live-event programming -- riveting, must-see TV that was resistant to DVR’ing and time-shifted viewing. And isn’t that what everybody in the TV business is looking for?

What amazes me is: Except for a single Democratic debate that aired on CBS on Nov. 14 -- a Saturday, when network TV viewing levels are at their lowest -- none of the broadcast networks glommed on to this phenomenon, despite the fact that the debates scored ratings the networks dream about, and only get these days for a tiny handful of shows, if they’re lucky.

Instead, the cable news channels had these debates all wrapped up and in every instance, the ratings these cable channels got for these debates blew away the viewership they usually get for their prime time shows.

Few shows on the broadcast networks draw audiences like this. Last week, only two shows in network prime time were in the same ballpark -- last Sunday’s NFL game on NBC -- 20.993 million viewers; and last week’s “Big Bang Theory” on CBS -- 15.269 million. Third place in the network rankings for last week came in below the lowest-rated GOP debate -- “The Voice” on NBC on Monday, Dec. 8, with 13.129 million viewers.

With more than 15 million viewers, “The Big Bang Theory” is the most popular comedy series on TV. But the fact is, while many people watch it, no one talks about it. But they sure do talk about the debates. For days and days on end following each of this year’s debates and leading into the next one, every single nuance, statement, grimace and eye-roll was discussed and parsed down to the most minute detail.

Not only were the ratings unlike anything these news channels are accustomed to, but then they got to own the discussions before and afterwards. And if there’s anything a cable news channel loves, it’s an opportunity to talk about -- and hype -- an event they themselves are airing.

A great example of this was the “countdown” clock some of the channels put on their air to count down the hours and minutes until the next debate (as long as it was one that they were airing, and not a competitor). Talk about hype -- these “clocks” started appearing as long as 48 hours before these debates. They made these political debates seem like heavyweight boxing matches promoted by Don King.

In a way, that’s why the debates were such huge successes this year -- because they were positioned as faceoffs between heavyweights: Donald Trump vs. Jeb Bush, Trump vs. Carly Fiorina, Trump vs. everybody. You might also add Ted Cruz vs. Marco Rubio in the most recent debate this week on CNN -- a departure from the Trump narrative, for a change.

Few events in our popular culture are discussed as thoroughly and feverishly in the days and hours before they occur than high-profile prize fights. These debates were prize fights too -- with the “purse” being the presidency of the United States. They were also a prize for the cable news channels, which were probably as surprised as anyone at how successful they were.