First Funnyman: Obama's A Comedian In Chief Getting Coffee 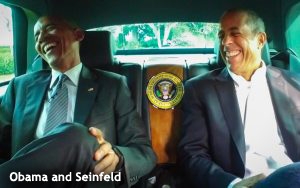 I told you so!

If there is any doubt left that President Obama aspires to be our nation's Comedian in Chief, then it has been dispelled by the announcement on Monday that he will be seen next week as a guest on Jerry Seinfeld's Crackle series “Comedians in Cars Getting Coffee.”

Please note that the title is “Comedians in Cars,” not “Commanders in Chief in Cars.” Ergo, President and Commander in Chief Obama, who's a pretty smart guy, evidently welcomes the addition of “comedian” to his list of accomplishments.

And yet, some readers of this daily TV blog objected when I referred to the president as “comedian in chief” in a blog post a little over a year ago when he appeared on one of the last episodes of “The Colbert Report” on Comedy Central.

In the column, I expressed the opinion that it was unseemly for President Obama to be seen idly joking around on a late-night comedy show because of the mess the world was in and because the job of U.S. president is such a serious one.

In the comments section, some readers made it clear they thought I was wrong. “I'm disappointed that MediaPost even published this nonsense!” wrote one reader. “It is nice to see that anyone can have an opinion, no matter how stupid it may be,” wrote another. One reader leveled this accusation: “You just don't get the joke,” the reader wrote.

Maybe I didn't “get the joke,” but I had the president pegged because now he's riding in a passenger seat that has been previously occupied by dozens of top comedians. Doesn't that make him one of them?

The president got together with Seinfeld earlier this month to tape this installment of Seinfeld's Crackle show, according to the press release from Crackle.

The episode was shot at the White House, according to the press release, which leads to the conclusion that this exercise in driving Mr. President lasted about as long as it takes to travel the length of the White House driveway -- unless they took the entire presidential motorcade out for a spin through the streets of Washington just to get a cup of coffee.

Not surprisingly, this detail was not addressed in the press release because hardly anyone in the publicity business knows how to write one these days. Nor were any presidential quotes -- or more to the point, quips -- provided, as is customary for press releases of this kind when a U.S. president is interviewed for a TV show, even a show like this one.

This question isn’t answered by the photo Crackle provided either (it’s the photo accompanying this blog post) because the photo has the president and Seinfeld riding, as passengers, in a car that looks to be one of the president’s limousines. Oh well, we can hope that all of these questions will be answered when this episode of “Comedians (and Presidents) in Cars Getting Coffee” premieres on Crackle on Dec. 30, at 11:30 p.m.

Last March, I refrained from referring to President Obama as “comedian in chief” in a blog post about an appearance he had just made on “Jimmy Kimmel Live.” Perhaps chastened by the reaction to the Colbert column some three months earlier, I referred to the President merely as “entertainer in chief” in this Kimmel column, in which I reported that, among other things, the president and Kimmel joked about UFOs.

Yesterday, when watching the upcoming premiere of the new “X Files” reboot (coming to Fox next month), I discovered that a clip of the president's UFO conversation with Kimmel was included in the show.

So, is President Obama vying for the title of Funniest President Ever? As they say on “The X Files,” the truth is out there … somewhere.