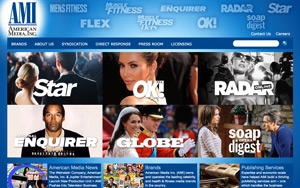 American Media, Inc. (AMI), which owns brands like OKmagazine.com and Radaronline.com, announced a 40% digital audience growth in 2015 -- good news for a company buried under millions of dollars of debt.

Radaronline.com's monthly audience grew to 16 million, 13% more than 2014, with an average of 134 million page views.

AMI's health and fitness brands also rose in 2015, with monthly averages of 22 million unique visitors and 129 million page views, a 45% increase in audience over 2014.

Mensfitness.com's audience reached an average of 13 million monthly unique visitors in 2015, a 53% increase. Page views grew 42% to 73 million per month.

According to a statement, AMI Chief Digital Officer Brian Kroski attributed the company’s success to a strategy of applying a data-driven approach to AMI’s content, as well as a focus on “social media distribution and mobile-first product development.”

In December, the company released a new mobile smartphone app for one of its tabloid brands, The National Enquirer. The launch followed an increase in both social media traffic and mobile traffic for the publication, at 64% and 108% growth year-on-year, respectively, according to The Association Of Magazine Media's monthly "Magazine Media 360 Degree" report.

This is all good news for the company, considering that this time last year AMI was in trouble. In order to shave off some of its $326 million debt, the company sold Shape, Natural Health and Fit Pregnancy to Meredith Corp. for $60 million last January.

AMI has been trying to diversify in other ways too. It has introduced a German-language edition of The National Enquirer, which will launch this Thursday, Jan. 14, marking the first time in the Enquirer’s 25 years to launch an international edition since the UK Enquirer.