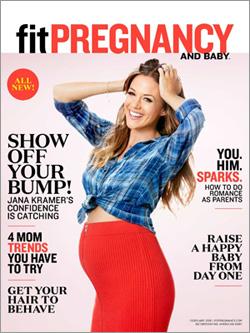 Meredith Corporation released Wednesday the first issue of Fit Pregnancy and Baby magazine, a blend of both publications

In order to shave off some of its $326 million debt, American Media, Inc. sold Shape, Natural Health and Fit Pregnancy to Meredith Corp. for $60 million last January.

Meredith has owned American Baby since 2002. The company decided to combine and relaunch the brands together, after shuttering Fit Pregnancy’s print edition last year.

Meredith kept American Baby’s rate base of 2 million for Fit Pregnancy and Baby, and will continue to publish 11 times per year. According to a statement, the company hopes the brand will reach an estimated multiplatform audience of 8.4 million.

The magazine will be led by the current editorial team for American Baby, including executive editor Mindy Walker.

Fitpregnancy.com will serve as the relaunched brand’s digital home. However, a quick look at the site shows it is still promoting subscriptions to American Baby.

The fitpregnancy.com site is part of the Meredith Parents Network, which reaches a combined audience of 11.4 million unique monthly visitors and social media reach of over 5 million followers.

"For the millennial woman, pregnancy and being a new mom is a uniquely special life stage, with its own celebrity icons, fashions, social-media trends and celebrations—like gender-reveal parties—that are unique to this generation,” Walker stated.

Carey Witmer, EVP and president of Meredith Parents Network, added that the brand reflects the “modern expectant and new mom's approach to maintaining a healthy lifestyle throughout her pregnancy and beyond."

Witmer stated that Fit Pregnancy and Baby will spark engagement and provide new opportunities for marketers “to connect with this influential audience.”

It also did the launch and growth of the Allrecipes magazine, which followed the acquisition of Allrecipes.com.